The concept of a new year is about restored hope, and to center on new opportunities and goals. Many cultures such all over the world believe that it is good to begin the year with food that will bring luck for the whole year to come.

Here are some of the traditional food items that are believed to bring good luck for the coming year when served on the New Year’s Eve.

Fruits are one of the most popular New Year’s food item. Eating 12 grapes, for example, is said to bring luck for the coming year. The tradition of eating a piece of grapes for each chime of a clock, began in 1909 by grape growers who wanted to decrease on excess of grapes harvested. It is said that it guaranteed sweetness and wealth in the year ahead. Each of the 12 grapes to be eaten follows the months of the year, and for every sour grape along the way that month that represent that particular grape is predicted to be the challenging one in the coming year. This grape ritual is frequently followed by parties that continues until the next morning and end with breakfast. In Cuba & Portugal, a special wish for each grape is made by the celebrants. 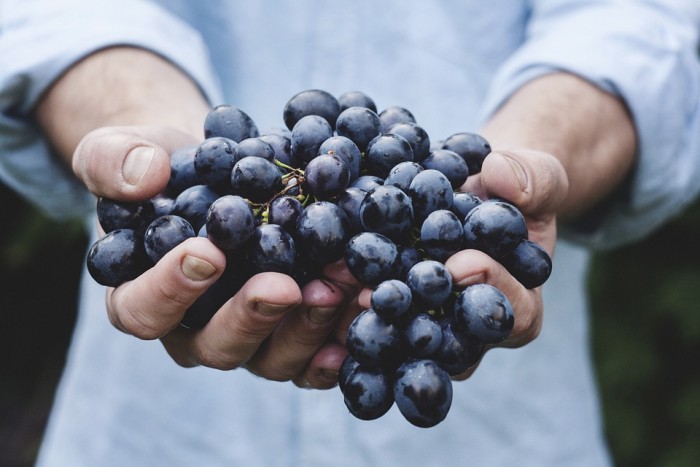 Eating 12 grapes on New Year’s Eve is believed to represent each month of the coming year.

Round fruits are also believed to symbolize coins and bring an abounding New Year. These round fruits include pomegranates, and oranges. In particular, tangerines and mandarin oranges are the most popular Chinese fruits on New Year’s because of their golden color and thought to represent good luck and wealth.

Watermelon is often served in Vietnam because for them, red is a lucky color.

Black eyed peas and green lentils are also said to bring good fortune for the coming year because they symbolize coins. In Italy, people often eat green lentils with sausages. In Puerto Rico, a recipe that is made of rice and beans called Arroz con grandules is prepared on New Year’s day. In Portugal, black eyed peas go well with boiled cod and potatoes. Beans are also said to bring about good fortune and humility. Black beans are often a side dish on the New Year’s Eve in Japan. It is believed to ensure good health for the new year.

Greens represent money. Paper money is represented by spinach, cooked collard, kale and cabbage. Germans munch lots of sauerkraut, Danish like them with cinnamon and sugar while in the U.S., collards are quite well-liked. It is believed that eating greens will bring more strength and fortune in the coming year.

It is believed that it is not good to serve chicken or beef on New Year’s Eve. On the other hand, it is best to have pork because pigs dig with their snout which symbolize forward movement to mean progress in our lives. In Germany, Switzerland, Austria, Ireland and Hungary, eating pork is believed to give people the moving forward notion and also symbolizes filling up of their wallets.

Fish is said to bring good luck because it swims in a forward direction, and its scales symbolize silver. Fish laying lots of eggs at one time is said to symbolize abundance. In European and Scandinavian countries, salted cod, pickled herring , carp and sardines are New Year’s popular dishes. In Germany, some people literally put fish scales in their wallet to bring good luck. Japanese also include herring roe for fertility and shrimp for long life as one of the New Year’s food.

Grains like quinoa, risotto, rice, barley and other starches represent abundance because they swell when cooked.

Serving noodles on New Year’s Eve, which started in China, is believed to bring longevity. They have the same belief as Japan where long toshikoshi soba noodle is served on New Year’s Day. The longer the noodles are the longer their lives will be as they believe.

Cakes and sweets are also believed to bring good luck in the coming year. Vasilopita or St. Basil’s bread has an important role in Greek New Year’s traditions. The sweet bread is baked with a hidden coin in it. When the bread is sliced and shared among the family members in Greece, the one who receives the piece with the coin inside it is assured to have good luck in the New Year. Also served in France is the King’s cake. The King’s cake has a small ceramic or coin inside. In Eastern Europe, donuts and fritters are also popularly served on New Year’s Eve. In Italy, small donut like balls called struffoli are placed in a circle and bind by honey, and topped with powdered sugar and candied fruit.

Round foods symbolizes the year coming in “full circle.” Pancakes, donuts, bagels, cookies, quiche, pizzas and quesadillas that are ring shaped have the same representation.

Which among these lucky food items will you serve on the New Year’s Eve? Leave a comment below.