A snapshot of the receipt for a meal served at a Thai restaurant in Redondo Beach, California in the US has gone viral not just because the customer did not leave a tip for the waitress who served him but because of the racist remarks written on the slip.

The tip remark definitely had nothing to do with the service the customer received from the restaurant but because the waitress is not a “US Citizen”.

The meal total was $22.84. On the space where customers can write any amount to tip the waitress, the customer wrote “Tip for U.S. Citizens Only”. Although customers are not really required to tip their food servers, this is a social custom that is widely practiced, especially in the US. 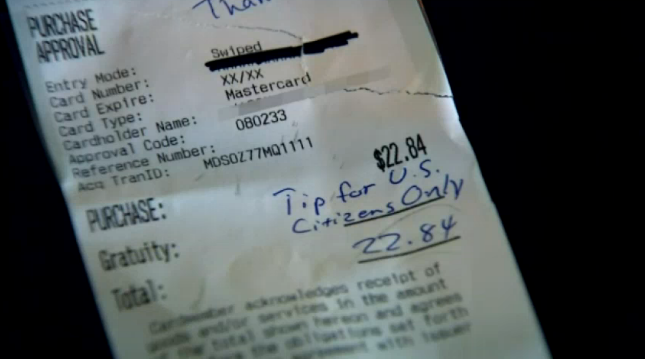 It is believed that the waitress would have let the matter of not receiving a tip pass if the customer did not add the racist note. According to the report by NBC Los Angeles, the waitress thought she must have done something to offend the customer yet her co-workers knew she did nothing wrong at all.

The report also revealed that the waitress is, indeed, not a US citizen as she is from Thailand but is working under a legal visa and is full of hope that she would get a green card someday so she can give her 2 children a better life.

Considering that the guy was so against tipping someone who is not a US citizen, many of those commented on the now viral photo of the receipt pointed out that he was dining at a Thai restaurant and should have expected to be served by Thai or other Asian nationalities.

Many thought it was strange for him to do that yet others said he was probably just a cheapskate who wanted to get away with tipping a waitress who actually did a remarkable job in serving him.

How Much Tip to Give the Food Server

There is no fixed amount or percentage of the bill for tipping the server but, in general, most people would tip anywhere from 15 to 20% for great service; though this could change depending on the level of satisfaction the customer received from the service as well as the customer’s available funds, of course.

Though there are also many people who believe that 10% of the total bill is already adequate as tip, there are those who actually give even more than the actual bill!

See – Waitress Receives Over $70,000 Donation for Sick Dad After She Paid for Two Firefighters’ Breakfast

Share this:
Tags:customer refused to give tip due to ethnicity, how to tip, photo of receipt goes viral, receipt, tip