Is it really time to review the death penalty and lower the age of criminal liability? Is it also time to check what kids are watching on their gadgets these days? And if a minor is involved in a heinous crime, should he/she be tried as an adult?

Such questions came to mind after reports surfaced that a 13-year-old boy is the primary suspect for the rape and murder of 5-year-old Mariel Cruz who was placed in a sack and thrown at an abandoned lot in San Jose del Monte, Bulacan in the Philippines.

The incident happened last Friday, July 21. CCTV footage taken inside the subdivision showed the teen going outside his house at around 2:46 PM on Friday, with the girl following behind him. The two entered a relative’s house but when the suspect went out some minutes later, he was already shirtless. 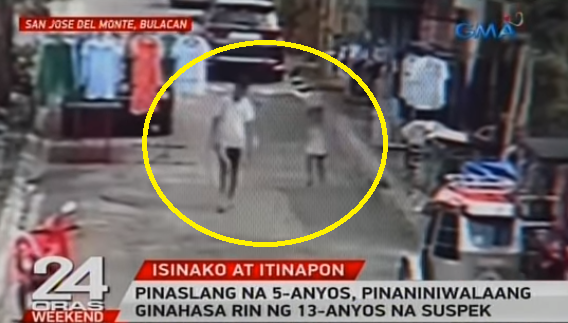 On the CCTV footage, the teen could be seen holding what appears to be a heavy sack on his back. According to reports, he even met the victim’s mother who was asking for the child’s whereabouts.

While the teen was not seen actually committing the crime or throwing the sack in the abandoned lot, he is treated as the primary suspect in the case due to the initial evidence gathered by the authorities.

Because he is still a minor, the suspect’s name was withheld and he is now under the custody of the Department of Social Welfare and Development (DSWD), not the Philippine National Police (PNP). Under the current laws in the Philippines, he could easily get away with the crime but the Cruz family hopes justice will be served.