Undertaken by Solana Land Development Corporation and Golden Build Corporation in behalf of the National Housing Authority (NHA), these housing unit costs PhP240,000 pesos. The uniformed personnel beneficiaries were expected to pay Php205,000 of the amount while the government will subsidize the Php35,000.

Since this is a low cost housing designed to help these uniformed personnel, they only have to pay back Php200 per month for 30 years. 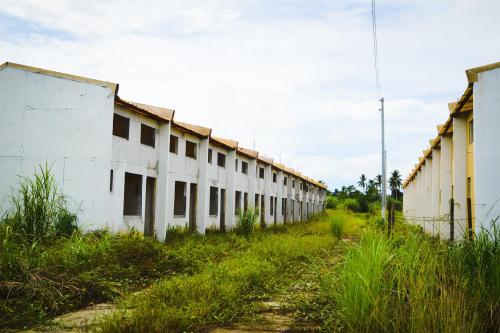 While the project sounds great, it seems that it was only great in theory. A team from NHA National Office conducted an inspection of the units last June but found some with defects. Still, that could have been due to neglect as the units have not been occupied.

Moreover, while housing projects like this village usually last for just 18 months, this one seems to have been abandoned by the contractor and the NHA is still waiting for the land developer to complete the project, revealed NHA Estate Management Specialist Dorcas T. Secreto.

A security guard (who wanted to remain anonymous) revealed that the beneficiaries did not move in because there was no electricity connection and running water in the village.

Of the 1,000 houses in the village, there are at least 4 which are occupied but the NHA has not yet issued a certificate of occupancy to any of the homes.