The lifeless body of 19-year-old Melcah “Jenjen” Melgar was found by her family just 500 meters away from their home in Purok Tinago Sambag, Brgy. Alijis, Bacolod City in central Philippines; although her head was still attached to her body, the still unknown assailant had snapped her neck so hard that her skull was completely detached from the spinal column.

What’s totally heartbreaking about the situation is that there were several witnesses who could have prevented her death – but it was also quite difficult to blame these witnesses for what happened to Jenjen, of course.

On October 18, 2016, morning, a number of witnesses had seen a guy in an XRM motorcycle ask Jenjen to ride with him to school but she refused. Some of the witnesses even teased Jenjen, asking if the guy was her boyfriend but she empathically replied with a big “No!” 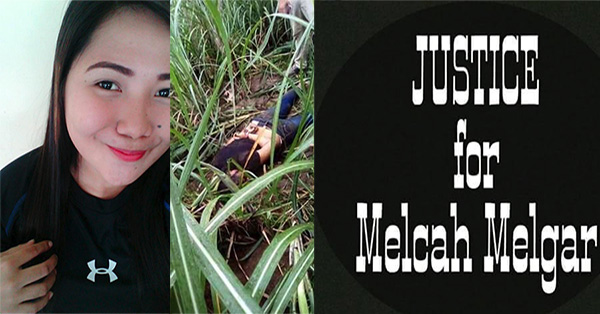 According to her classmates in Carlos Hilado Memorial State College, Jenjen bid them goodbye and went home in a PUJ past noon; that was the last time they saw her alive.

Sometime past 12 noon, a woman was walking home on a quiet road inside the sugarcane plantation where Jenjen lives when she heard voices among the plants. She heard a woman’s voice saying that she wants to stand up but a man told her not to.

Thinking that the voices she heard were from amorous lovers enjoying a tryst in the sugarcane field, she quickly walked away.

Another witness, a man, passed by the road a few minutes later. He stopped near the spot to urinate. When he heard muffled moans, he picked up a stone and threw it in that direction but when nothing moved or spoke, he eventually went away without doing anything.

It would be minutes later when two grade school students saw a man emerge from the sugarcanes and walk quickly towards the road. The man had a beard and was wearing a black shirt. The kids told their parents about the man they saw but the parents did not also check the area as they thought the man was not doing something suspicious.

Hours later, Jenjen’s parents grew worried that she still wasn’t home and they couldn’t reach her on her mobile phone.

By morning, they asked help from their neighbors to find their daughter and they were surprised to hear about the strange stories the other witnesses talked about. So, with the help of these information, they went to the spot the neighbors pointed. A quick search revealed the lifeless body.

As of press time, the cops still have no lead as to the identity of the suspect and the motive for the crime but the autopsy revealed that Jenjen was not raped.