What did you do with your first paycheck?

Many of us went on a shopping spree on our first paychecks – after all, this was the money that we were worked hard to earn!

But many also give a portion back to the Lord in terms of offering while others treated their family and friends with their first paycheck. A lot also give some money to their parents and other relatives such as siblings or grandparents as a way of sharing their blessings and also as a ‘thank you’ note.

I have the sweetest lolo in the world!!!! HUHU ?❤️?❤️ pic.twitter.com/OCvc7JPX9v

That’s exactly what netizens Celine Lopez did when she received her first paycheck in an internship at Colgate-Palmolive Philippines, Inc.

While the amount of her first paycheck was not disclosed, she gave Php200 ($4) to her grandfather last June 3. To her, it was not really a big amount and it didn’t mean much except that she wanted to give back to the man who had been there for her family, providing for them and helping her parents out whenever he could. 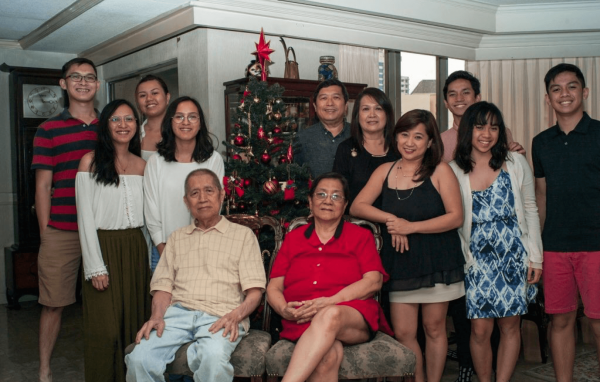 Celine (in blue dress) with her family
Photo credit: Celine Lopez / When in Manila

Much to her surprise, however, her grandfather framed the money as a tangible memento and proof of love. When she went back to her grandfather’s house, the old man happily showed her the framed money which came with a heartwarming note and two of her photos, one of which appears to be a baby photo although she had that screened out.

“When giving some of what I got to my lolo, I honestly had no idea it would make that much of an impact on him. I didn’t think too much about it really, doing what I did felt just like instinct, the least I could do to someone who’s given me so much,” she told When in Manila.

The framed memento now hangs on the wall, next to some portraits at her grandparents’ house.

A memento is an object or souvenir that reminds a person of a particular event, trip, or another person.