MANILA, Philippines- Liberal party (LP) standard bearer and former Department of Interior and Local Government (DILG) secretary Manuel “Mar” Roxas II is embroiled in another controversy after a photo of a comic book depicting him as a hero during the typhoon Yolanda went viral online.

According to a report by Rappler, copies of the comic book titled Sa Gitna ng Unos (In the midst of disaster) were distributed during the birthday celebration of LP provincial leader Ayong Maliksi on Sunday, March 27 at Imus, Cavite. 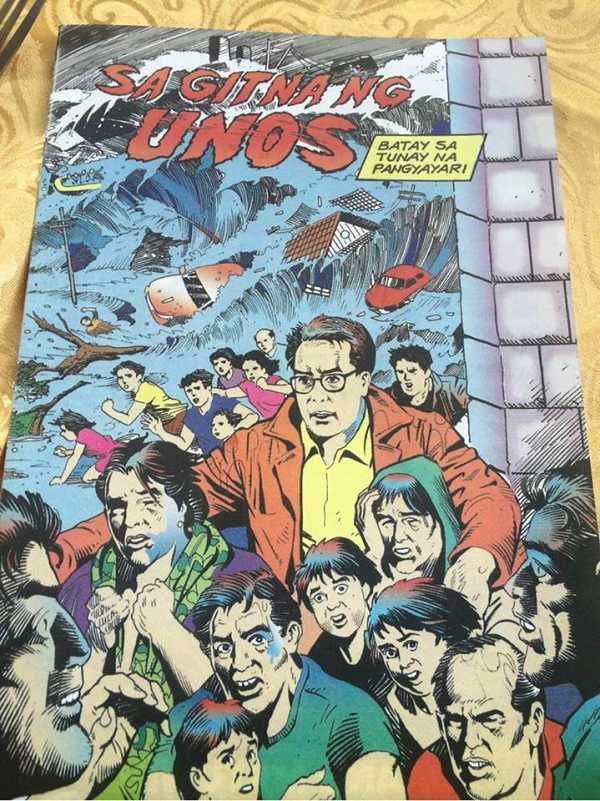 The comic apparently tells the early life of Roxas including the death of his older brother, former Capiz Representative Gerardo Roxas Jr. Personal details such as his son Paolo and his marriage to broadcaster Korina Sanchez were mentioned in the booklet.

The comic book also emphasized the accomplishments of Roxas as Capiz congressman, as DILG chief during the administration of past presidents Joseph Ejercito Estrada and Gloria Macapagal-Arroyo, and as a senator.

However, the part detailing Roxas’s role in the typhoon Yolanda operations has sparked outrage online. The cover of the comic book, which appears to portray the presidential aspirant as a hero during the deadliest Philippine typhoon that killed 10,000 people particularly in eastern Visayas in 2013, indeed earned the ire of netizens.

Journalist Katrina Stuart Santiago wrote in her viral Facebook post: “Mar Roxas is a hero in his own comics, which is so obviously about the strongest storm to ever make landfall, and so obviously NOT about how he and his government messed up rescue, relief, and rehabilitation efforts in Samar and Leyte. “

I don’t know where the gall and temerity, the kabastusan of this matuwid-na-daan comes from, but apparently none of the…

Meanwhile, Roxas’ spokesperson Ibarra Gutierrez claimed that the comic book was created by the presidential candidate’s supporters in order to dispel lies and myths surrounding the 2013 rescue and recovery operations.

Also known as typhoon Haiyan, super typhoon Yolanda is considered as the deadliest Philippine typhoon documented and is one of strongest tropical cyclones ever recorded. Approximately 10,000 people died particularly in Samar and Leyte, Philippines, while 11 million people have been affected by the super typhoon across the world.