Home
News
Weird News
LOOK: These Realistic “Avatar” Babies Are Freaking Everyone in the Internet

Dressing up as an Avatar for Halloween is a great idea but seeing realistic  “Avatar babies” may be pretty disturbing for most people.

A video of lifelike babies who equally look like humans and aliens has taken the Internet by storm after it was shared on Instagram. The video, which featured three seemingly real “Avatar” infants, has over 2.4 million views. 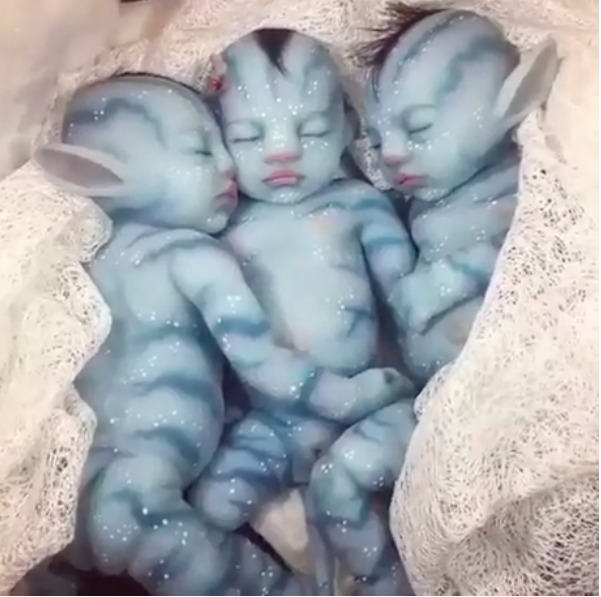 Shortly after it became viral on Instagram, it was reposted to Twitter and had netizens buzzing over the freaky little creatures.

Apparently, a Spanish company called Babyclon manufactured the odd-looking dollls, which cost $2,000 each. All dolls sold by the company are made of platinum medical silicone, which is the most elastic, flexible, and resilient in the market. Products come with a Certificate of Authenticity.

While many were shocked by the Avatar babies, there were some netizens who expressed interest in purchasing one for them.

A 2009 American film directed by James Cameron, Avatar is set in the mid-22nd century at the time humans are colonizing Pandora in Alpha Centuari solar system to mune the mineral unobtanium. But during the expansion of the mining colony, the existence of a local trible called Na’vi, a humanoid species indigenous to the area, was threatened.

The blockbuster movie became the best-selling film of 2010 and the first movie to gross over $2 billion. It also surpassed the movie Titanic, also directed by Cameron, as highest-grossing film of all time.

In his interview with Time magazine in 2007, Cameron described Avatar: “It’s an incarnation of one of the Hindu gods taking a flesh form. In this film what that means is that the human technology in the future is capable of injecting a human’s intelligence into a remotely located body, a biological body.”