MANILA, Philippines-Do you use a different brand of charger when charging your mobile phone? A netizen has decided to share his family’s ordeal after a Samsung S4 unit suddenly exploded and caused fire inside their home.

In the early morning of Wednesday, October 19, Daverianne Quibael Beltrano’s family was informed by their neighbors that one of the rooms in their house has caught fire. Luckily, they were able to stop the fire just in time and no one sustained injuries from the incident. 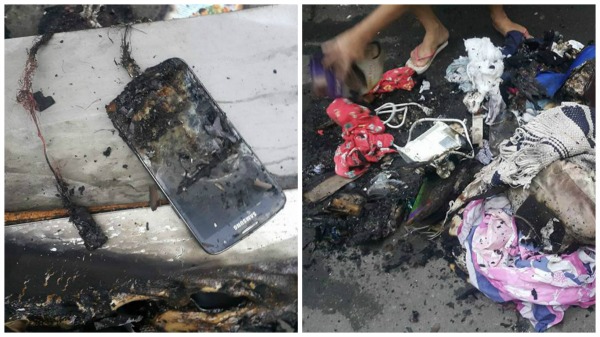 Apparently, the fire incident was brought about by the explosion of a Samsung S4, which was improperly charged. According to Beltrano, his mother charged his father’s cellphone using a different brand of charger, Alcatel, the night before the fire occurred. He noted that the phone was not charged overnight.

In the morning, his mother noticed that the phone was hot due to charging. This prompted her to turn it off and transfer it to another place. Barely thirty minutes into charging, the phone suddenly exploded without their knowledge.

Beltrano warned about the possible negative effects of charging a phone using a different charger. He wrote down the following safety reminders for mobile phone users to avoid a similar incident.

Early this month, South Korean gadget company Samsung has announced that it will permanently discontinue its flagship smartphone, Galaxy Note 7, following multiple reports of the device catching fire and exploding due to battery faults.