For Catholics, statues and various relics or replicas of saints and religious figures are considered sacred. These sacred statues symbolize their faith. But while other religions may not believe in statues, this surely does not give anyone the right to disrespect these symbols of other people’s faith!

For this reason, a guy has gone viral and earned the ire of people on social media for pointing the middle finger at the statue of the Virgin Mary, which is the second most sacred statue in Catholicism, next to Jesus’ image.

Catholics and non-Catholics alike reacted to the photo, condemning the man for showing such blatant disrespect on the sacred figure. Catholics expressed anger over the action, especially because the Virgin Mary statue is an important figure for the religion; however, non-Catholics also felt angry at the man for showing disrespect, telling him that while such statues are not part of their religion, he should not desecrate something that others believe in. 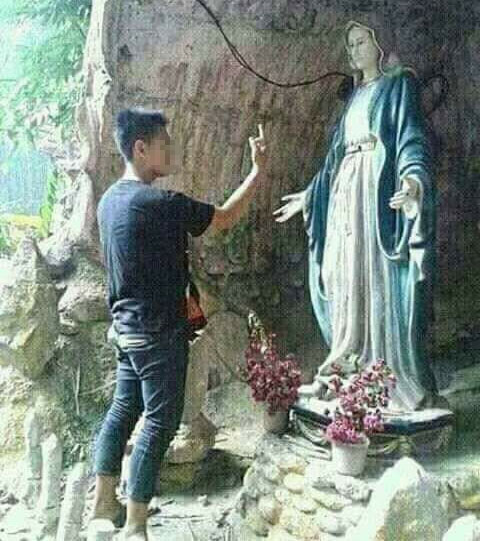 Still, there were those who commented that the man did the right thing because the Bible has clearly instructed that people should not make image of God or any other religious persona. Others pointed out that God punished the Israelites for making statues; thus, it was not good that the Catholics made a lot of statues.

But while such commenters existed, more were angry that the man did not show respect to the symbol.

Meanwhile, another guy has gone viral for desecrating a religious symbol. This time, the guy climbed up a statue of Jesus being held by a woman under the cross. While he probably didn’t think he was doing anything wrong and had only wanted to have a selfie taken for bragging rights, this didn’t sit well with the religious ones who condemned him for his actions. 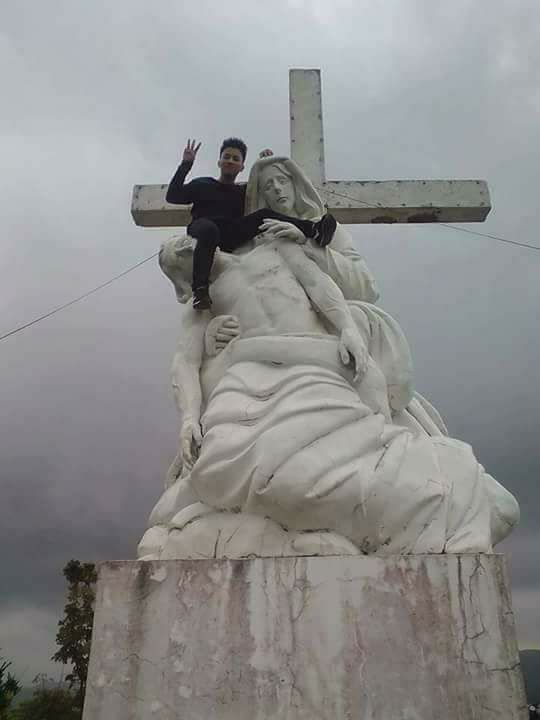 What do you think of these photos?