Every now and then, there is one person who posts a status on social media without even thinking of the consequence of his/her action or how stupid the post actually is. They just post this random rant, crazy photo, or whatever silly thing in the heat of anger or with the influence of alcohol, perhaps.

Many of these random photos or posts can be quite funny but one of these really enraged netizens: a post by a young girl (whose name and profile photo were blotted out for privacy reasons) ranting about someone who she later revealed to be her dad.

Now, most people would have chosen to stay out of family issues but this one is different because this young girl had a misconception that her dad did not have the right to look for her and get angry she went home late at night because, take note, he is not her boyfriend! Wait…what???

So, let me ask you girl, your boyfriend has more right than your dad to get angry if you go home late??? What a crazy world we live in!

It really is crazy how this girl actually posted this rant on social media, angrily admitting that she even shouted at the old guy because she lost her patience over his actions. She feels she is in the right position because who is he, anyway? He’s just her dad, not her boyfriend!

Here’s the post that made our blood boil, first shared by FB page Curse One: 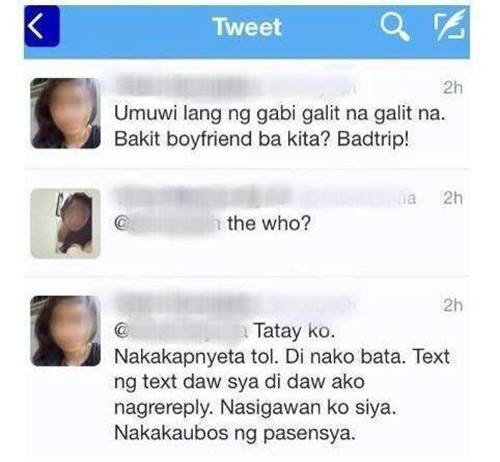 Parenthood is a difficult task, especially when the kids reach their teenage years – the time when individuals experiment on a lot of things and develop a rebellious streak. Psychologists believe this happens because an individual is trying to find an identity that is independent from own parents and family.

Teenage rebellion is a reality that it is widely accepted in popular culture and is often depicted in movies and mainstream media.

Thankfully, most people get out of this rebellious period unscathed and matured enough to embrace adulthood, wiser.