When you are working with a top wedding photographer, you know the outcome will be pretty awesome and memorable. Still, this bride didn’t expect something really crazy – and dangerous – would happen.

CM Leung, one of the world’s most popular wedding photographers, was in Iceland for a wedding photo shoot and one of the snapshots he took can be seen below. As you will see, the bride is in a glamorous pose while a helicopter is flying just right above her.

The chopper, however, was real and not merely Photoshopped to make the image look cool. It was all a matter of perfect timing. 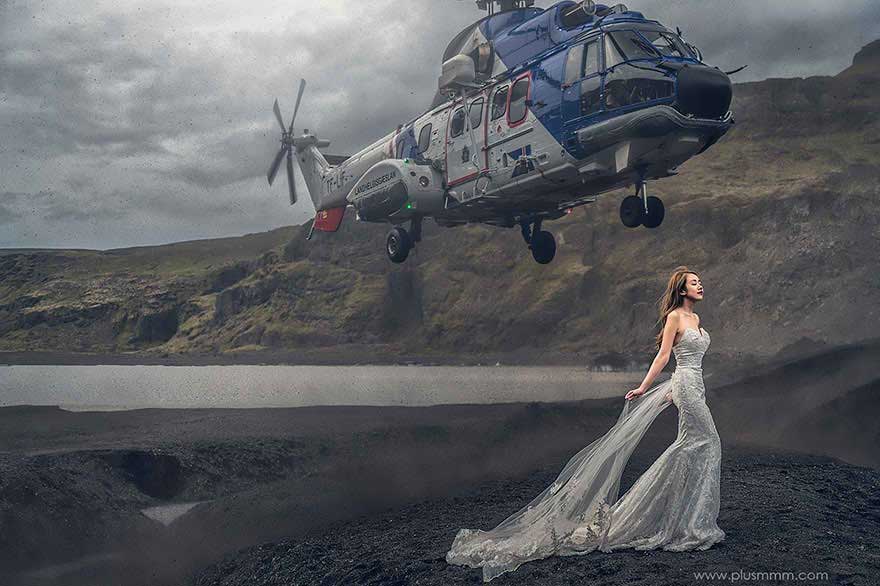 According to the EliteReaders website, “the Icelandic Coast Guard was on the area to rescue someone.” The chopper flew past the bride while they were having a photo shoot and to her credit, she was able to hold her pose and so Leung was able to take a nice shot.

“Still,” EliteReaders tells us, “the impact eventually knocked her over and if you’ll look closely, it kinda appears like the chopper almost hit her in the head.”

You can watch the video of the risky photo shoot here:

The YouTube video earned mixed reactions from netizens. Although some praised the unique, well-timed concept, some said what they did was actually insensitive.

“Just like to point out that the coast guard helicopter was likely picking up someone severely injured (the only thing that warrants its use) and the cameramen manipulated the scenario with no respect for the victim to get that footage.”

Who Is CM Leung?

The site further shares that Leung is “well-known for his unique style of shooting with the combination of natural light and his amazing vision. His images are elegant, intimate and artistic. He is a photographer who is able to translate feelings into images that touches one’s emotion, mind and heart. “