Sleep paralysis involves awakening from sleep and not being able to move or talk. It feels like a mysterious presence is floating over your bed, or a heavy thing has been sitting on your chest. Sleep paralysis is seriously one of the strangest and most frightening phenomenon produced by the human brain. Some people think it is caused by the presence of evil, an alien abduction or even the devil!

Usually, a normal sleeper’s brain and body activity will slow down as he or she enters into a deep sleep, before increasing in speed again as the sleeper enters the rapid eye movement sleep (REM). Most vivid dreaming occurs in REM sleep and this sequence between sleep stages, takes about an hour and a half to a couple of hours and recurs many times throughout a night. 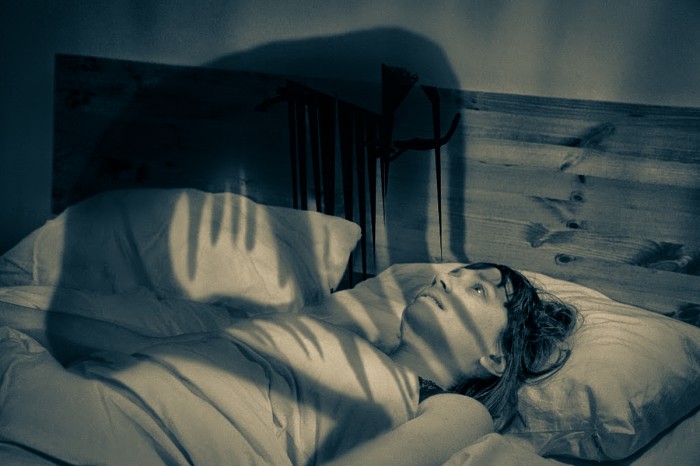 During an episode of sleep paralysis, a person feels like his body is paralyzed which can come with feelings of fear, hallucinations, and an overwhelming pressure on the chest.
Photo Credit: Plaid Zebra

There is no identified specific reason why people experience sleep paralysis, but it mostly occurs when a person has irregular sleeping patterns, is sleep deprived, or sleeping on one’s back.

Here are some facts you might want to know about sleep paralysis:

1. Sleep paralysis is the isolated period of calm in which voluntary muscle movement is withdrawn yet eye and respiratory movements are intact.

2. In a sleep paralysis episode, one cannot speak.

3. The body, legs  and even the head cannot be moved. However, one is able to breathe normally and is aware of what is happening around him.

4. The episode of sleep paralysis can last from a few seconds to even a lot of minutes.

5. Sleep paralysis usually begins to happen when one is in his teens. It happens more often between the ages of 20 to 30 and continue in later years.

6. It can run in families. The biggest factor of sleep paralysis is lack of sleep, schedule change, and sleeping on the back.

8. When a person is already aware that he is experiencing a sleep paralysis episode, he can stop it by wiggling toes, clenching his fist, or coughing for help.

9. Sleep paralysis occurs when the mind is partly awake but the body remains asleep.

10. This can be the most terrifying to experience, but has no serious medical risks. The only damage it can cause that may have an effect in the long run is becoming sleep deprived.

11. Sleep paralysis can happen in both stages of sleep- trying to sleep and waking up.

12. During episodes of sleep paralysis, a person can feel a loud bang or explosion in his head (waves crashing against rocks)  or horrifying whispers (frightening words from other worldly beings wishing the person death). Some feel pressure or a choking sensation accompanied by breathing difficulties which rise into sexual molestation or assault.

As scary as these facts are, it can be a relief to know that there really is no evidence that sleep paralysis can kill. With enough sleep and an ample amount of rest, one can avoid these terrifying episodes of sleep paralysis.