People from all walks of life may experience depression at some point in their lives. Even people who seem to have everything can suffer from this complicated mental disorder that makes all aspects in life just so difficult.

While all other kinds of mental illnesses are quite unusual, depression is quite more common. According to the National Institute of Mental Health, more or less 7 percent of American adults-an anticipated 16 million people in 2013- had experienced at least one major depressive occurrence.

As widespread as it is, the stigma around depression still continues. This is why it matters when prominent celebrities and other well-known people reveal their own fight against the disorder. Lady Gaga, “Nashville” actress Hayden Panettiere and Sarah Silverman have revealed their fight with depression and anxiety.

People who experience depression say the feelings of anguish and hopelessness may never be truly recognized by those who have never experienced it. Here are some words that one should say (or should not say) to people suffering from depression. 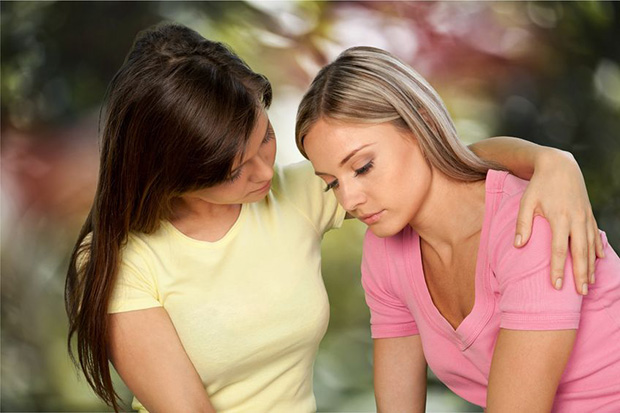 Knowing what to say and what not to say to someone who is depressed can greatly help ease their suffering.
Photo Credit: SACAP

Psychologist Dr. John Grohol, chief executive and found of PsychCentral.com, says “Don’t just say it, mean it.” This would mean checking regularly on a family member or friend who is suffering from depression. Advising them to go to a therapist (when they are ready), and offering to give any support to them. It is very important for depressed people to know that someone cares for them.

People with depression can be so absorbed in thinking and repeating negative events or worrying over how some situations could have come out differently.

Moreover, ruminative thinking or over thinking can make depression worse. While therapists help people deal with this kind of negative thinking, family and friends can help, too. Doing a physically and mentally challenging activity together can help to distract a person with depression from ruminative thinking, according to Dr. Carl Tishler, adjunct associate professor of psychology and psychiatry at The Ohio State University.

3. I don’t really know what you are exactly feeling, but it must be very difficult.

Depression is a complicated condition. It has biological, psychological, and genetic components which only licensed professionals can understand.

Acknowledging that one may not understand the disease, but that he is aware that it is real and frequently difficult to control can be helpful for both the depressed individual and his family or friend.

4. Sometimes, we don’t need to say anything at all.

Being a good listener can be very beneficial to the depressed individual. Feeling of isolation and loneliness can often overpower someone with depression, just the mere presence of a family member or friend can greatly help. This is the power of shared humanity according to New York City-based psychologist Dr. Alison Ross.

Clinical depression is a mental mood disorder which is best treated with both psychotherapy and medication, together with lifestyle changes like stress reduction and exercise. Suggesting to a depressed person to just go shopping (or drinking) will do more harm than good. They may like the feeling of satisfaction at first, but this will not help in the long term.

This kind of assertion means that the one to blame is the depressed individual himself. It can be destructive to give negative comments that mean they are in complete control of their mental health because they already have feelings that they are weak to fight the illness.

3. I was actually depressed once.

Having an occasional feeling of sadness is not the same as clinical depression. Let these individuals with depression talk about their own feelings.

4. Don’t be depressed, other people have worse problems than you do!

Depression may lead to problems with relationships, studies, work and finances. However, be aware that it is very difficult for a person suffering from depression to look at the situation of others. Often times, a depressed person is fixated with his own situation, and telling them that there are people who have worse problems will only put them down.

The friends or family members of a person suffering from depression cannot “fix” them but they can surely help decrease their feelings of isolation and loneliness, says Dr. Arthur Nezu of the Drexel University, Philadelphia. Knowing what to say and what not to say to someone who is depressed can greatly help ease their suffering.

Share
Tweet
Pin
Share
Tags:clinical depression, depression, how to help someone who is depressed, mental disorders, This is What You Should Say (And Not Say) to a Person Who is Depressed