It’s easy enough for most people to say that luxury goods should be taxed heavily, but that’s only because they themselves don’t have to deal with it. As for those who are interested in purchasing luxury goods, specifically a luxury car, then you’ll have to take a closer look at luxury car tax (LCT) and why people from the automotive industry tend to call for its abolition every now and then.

For those who are not that familiar with luxury car tax, then there are five things you may want to know about that Mercedes Benz tax. 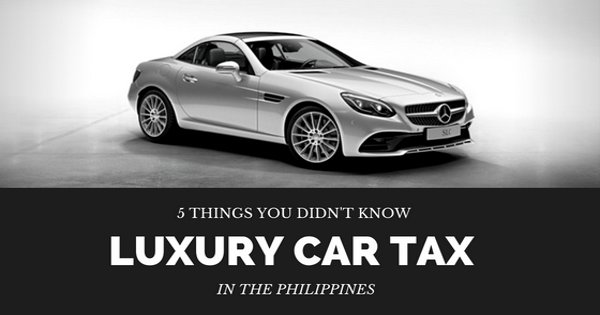 What Luxury Car Tax is

Most of the time, luxury car tax is imposed on whoever is selling the car, but distributors tend to pass it on to the buyer. Luxury car tax is specifically applied to cars that reach a price threshold deemed to be the high end, and that threshold is subject to change depending on market and economic conditions.

How is it calculated?

Here in the Philippines, it’s the upper bracket of what’s officially called Excise Tax for automobiles and other motor vehicles, and it has its own percentages apart from other taxable goods. Luxury cars are classified as those priced at PhP 2.1 million and over.

That does seem excessive, and that doesn’t even include other expenses to purchase and own that car like registration and such. That’s why you have to think carefully and plan ahead when considering the addition of a luxury car in your garage, even if you’re the luckiest person in the world who just won the lottery.

Just remember that 60%. It’s quite steep, and the PhP 512,000 flat rate for a car priced at PhP 2.1 million means you have to spend at least PhP 2.6 million for a “luxury” car. Most cars at that price range aren’t even strictly considered “luxury” in the first place, so you have to shelf out even more for a car that can actually be put in the luxury category.

Can I Get Exempted from Paying Luxury Car Tax?

This is pretty much the first question that comes to mind when dealing with any kind of tax. No one likes the tax man, no one invites him for Christmas dinner, and everyone makes it hard for him to do his job. Exemptions for luxury cars are few and far between, but they do exist.

There is mention of tax-exempt luxury cars in the Revenue Memorandum Circular no. 69-2004 which are registered or owned by Diplomatic Mission and Consular Offices or Officials, its officers, administrative staff, and technical staff members. There’s more information on this in Republic Act No. 9182, which is Special Purpose Vehicle Act of 2002 that details tax exemptions and fee privileges for special purpose vehicles.

So unless you’re a diplomat or maybe an official in a recognized religious organization like the Roman Catholic Church or such, then you’ll have to pay luxury car tax for that dream car you’ve always wanted.

The luxury car tax is something that persisted throughout history in some form, and it does look like it won’t go away soon as a lot of people tend to think of it as a good idea. The idea of taxing what’s known as non-essential goods is as old as governance in human history, so luxury car tax is simply an extension of that sentiment.

The luxury car tax here in the Philippines is higher compared to other countries due to the current income brackets of the workforce, most falling under what would considered to be sufficient to reasonably purchase a luxury car without taking out a huge car loan. Therefore, those who buy luxury cars here tend to have to deal with a lot more hurdles.

With the new administration, there have been adjustments to the taxation here in the Philippines, mostly benefiting low and medium income households. That does mean luxury car tax has increased to cope with the adjustment. The aforementioned formula above is pretty much along the lines of where it is now with the 60% rate, which has been publicly frowned by car companies which had been aiming to improve the local automotive industry for a while now.

About the Author: Kristel Cuenta is a freelance Social Media Manager and an Online Content Specialist based in the Philippines. She helps brands grow & engage on Social Media.