A young student named Matthew Torres posts a rant on Facebook, lamenting about how adults are fond of implementing the “respect adults” rule, especially preventing younger ones from talking back. The post has since gone viral, though as of press time Torres has already taken down the post but this has been re-shared on social media by other users who believe that the young man was correct.

Mickey Bautista re-shared Torres’ post, adding a caption, “Most of the youth can relate to this.”

According to the post, Torres is lamenting how it was quite illogical for adults to implement the “bawal sumagot sa nakakatanda (talking back to older people is not allowed)” and “respect the adults” rules.

He believes that their house’s “obsession” with these rules is illogical, mostly because there are times when the adults are wrong and the younger ones are on the right track but couldn’t defend themselves because doing so would be another offense.

The irked young man believes it was “toxic pride” for adults not to accept that they are also mistaken.

According to Torres’ rant, “prideful ‘grown-ups’ equate rudeness with teens’ expression of thoughts and feelings.” He believes that everyone has equal rights to correct those who are wrong, regardless of their age brackets. 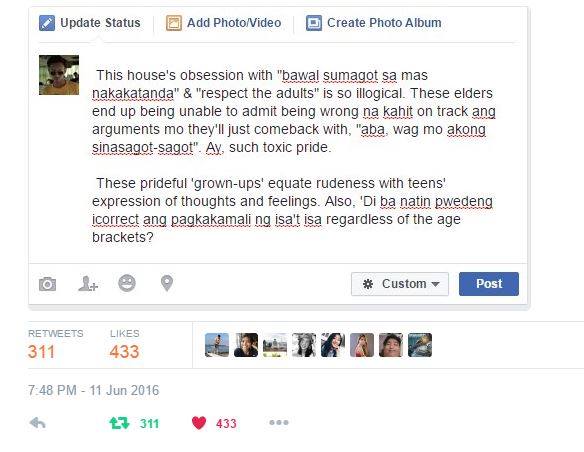 The post has garnered sympathy from the younger generation who, just like Torres and re-poster Bautista, could relate with the situation.

Some of those who commented to Bautista’s post of Torres’ rant said that they experienced the same thing and also believe that their parents or older people should really allow younger ones to explain themselves.

Others advice the young ones to simply keep quiet and let the adults be because when they, the teens, get older, they will realize that the old ones are correct.

One young man’s response got our attention because he wrote about a “loop hole” in this situation.

Well there’s actually a loop hole for this and I’ve been using it for the past 7 years. But I only use this on my parents.

What do you think about Torres’ rant and the arguments?