“The Fault in Our Stars” is a book published by author John Green in 2012. The sixth novel by this author, the book tells the story of two teenage cancer patients who start a life-affirming journey to visit one reclusive author in Amsterdam.

It is easy to see why this movie had such a huge following among teens and young adults, so much that it was made into a movie which was released two years after the success of the book.

Now, the movie and the book have been referenced in other stories – and there’s a new parody by a young man named Kyle Cayabyab of Baguio City, Philippines. Cayabyab was one of the 18 roses in the grand debut of Charrie Joan which we featured some months ago.

In this parody, Cayabyab created a poster to highlight what he believes is unsafe water being sold in Baguio City – something that is supposedly backed by research, including one entitled, “Towards Establishing Water Security and Urban Resilience in the City of Baguio” he said was published by UPB-IIED.

In this Facebook post, Cayabyab revealed, “85 percent of households [in Baguio City] rely on water-refilling stations for their drinking water because water from private deep wells are much cleaner and safer to drink than tap water.” 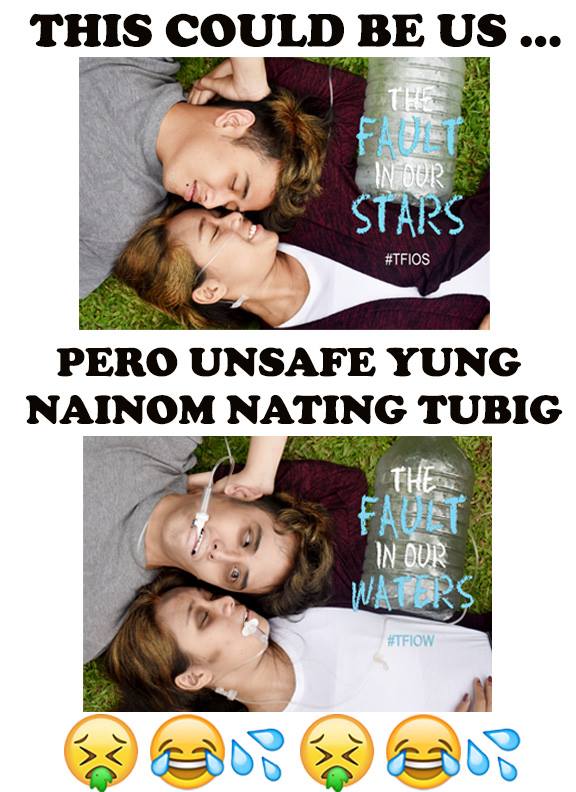 While that might sound good, the reality is not so bright.

“Now we can say that these water-refilling stations are somewhat responsible for the health of each family from these households. However, the research group also found out that the 42 percent of water sample in 2013 and 47 percent in 2014 didn’t pass the National Drinking Water Standard which means they did not pass the microbiological and hygienic quality assessment for drinking water,” he wrote. “You may be getting water from them and you may never know.”

To send his message across, Cayabyab altered the original movie poster’s theme, showing the lovers now dead because of “The Fault in Our Waters”.

He ends his Facebook post with an explanation as to his intentions, “Our concern is to inform you about the importance of clean water, and promote the proper way of dealing with impure/unsafe water. Not all that is clear is clean.”

It is cool how this young lad was able to create this parody to support his advocacy.

What do you think of the poster and his story?