Hulk Hogan remains as one of the world’s most famous wrestlers but the WWE has deleted him from the Hall of Fame page on WWE.com, erased any references to him across the site, removed all his merchandise from the store, took him out of the WWE-produced reality series Tough Enough, and terminated his contract.

Such a tough punishment to the WWE’s most iconic pro wrestler – and the reason behind this is a bit surprising as speculations across several sites believe the Hulkster was punished because of his racist rants against his daughter’s girlfriend. Apparently, Hogan used the forbidden N-word in his rants against the man – and it was all caught on tape!

He supposedly said this on tape, reports the NY Post, quoting sources of Radar Online and The National Enquirer:

I mean, I’d rather if she was going to f–k some n—-r, I’d rather have her marry an 8-foot-tall n—-r worth a hundred million dollars! Like a basketball player! I guess we’re all a little racist. F–king n—-r.

But this controversial statement supposedly happened 8 years ago! It is unbelievable how this issue has just recently come to light. Sites like the NY Post believe this has something to do with the $100-million dollar suit Hogan filed against gossip site Gawker for publishing intimate tapes of him and the now-ex-wife of his then-bestfriend. 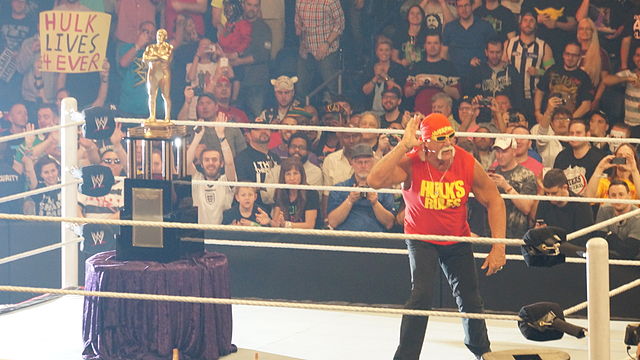 Here’s WWE’s statement on his dismissal:

WWE terminated its contract with Terry Bollea (aka Hulk Hogan). WWE is committed to embracing and celebrating individuals from all backgrounds as demonstrated by the diversity of our employees, performers and fans worldwide.

WWE refused, however, to release the exact reason why they were terminating Hogan’s contract.

Eight years ago I used offensive language during a conversation. It was unacceptable for me to have used that offensive language; there is no excuse for it; and I apologize for having done it. “This is not who I am. I believe very strongly that every person in the world is important and should not be treated differently based on race, gender, orientation, religious beliefs or otherwise. I am disappointed with myself that I used language that is offensive and inconsistent with my own beliefs.

Hulk Hogan and the N-word

Hogan does have a thing with the N-word, with online wrestling forums digging up an old audio of radio interview on DJ Whoo’s SiriusXM show. He used the word several times to tell a story but, as you can hear in the video below, he did not use it in a racist way but merely saying several of his friends use in on him so he later got used to saying it, too.

He would later lament how these people are permitted to use the N-word on him yet trouble erupted when he used the word himself.

Listen to a portion of the interview here: