When queuing in banks, shopping malls, or mostly everywhere, pregnant women are allowed to jump the line so they can finish the transaction as quickly as possible. Many of us take this for granted, understanding that such is necessary and is their right. Yet one netizen (a woman at that!) was angry over this, saying she feels that it is unfair.

Whoever this netizen is, she readily admits that she’s a woman but that she feels that pregnant women should not be exempted from queuing but must wait for their turn, especially if a number system is being used to determine who gets attended to first.

She went on to rant that a pregnant woman disregarding the number system (and being allowed to do so by the bank) is rude and disrespectful. Further, she argued that the pregnant woman would not prematurely deliver the baby just because she was made to wait for her turn. 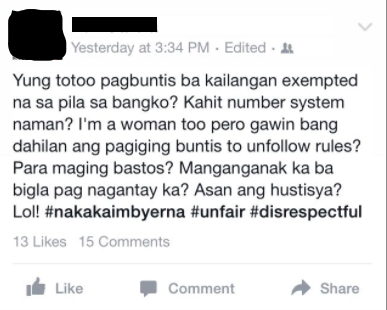 We do not know the identity of this woman but thousands of netizens angry at her for her insensitivity but others merely pity her stupidity. Many are calling her stupid for firing such a rant.

Netizens pointed out these known facts about being pregnant:

Based on this woman’s reaction, she probably hasn’t experienced being pregnant at all or she wouldn’t be so angry about this pregnant woman who cut the line. Well, she probably posted the rant on social media hoping that her friends would side with her and get angry at the pregnant woman but the post backfired and she has now become the target of netizens’ anger. We surely hope this incident has enlightened her.

As netizen Aki Dianopra said in a comment about the article on When in Manila’s Facebook page, “Oh I agree, they should not be given special treatment, but PROPER and NECESSARY and EXTRA CAREFUL treatment. They are not special in any sense, they are one of a kind.”