A woman believed to be Singaporean went to a salon in Johor Bahru, Malaysia for a perm. She made numerous complaints at the time and refused to pay for the service, saying she was not satisfied with the service. The salon workers and owner let it pass, especially because they had just opened the store and didn’t want trouble.

Some days later, the same woman came back to the salon to get a haircut and have her hair dyed.

Thinking she had changed her mind and would also pay for the perm during her first visit, the salon workers treated her hair. But when it was finished, the woman complained that she didn’t like the haircut and the dye didn’t look good on her head. She went out of the salon, again without paying. 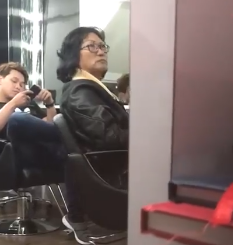 This time, however, the salon workers called her number to politely ask when she would come back to pay for the services they had rendered. The woman angrily went back to the salon, lashing out at the workers and telling them that they did not deserve to be paid because she thinks their work was bad.

She refused to pay for the services, even demanding to talk to the salon owner to complain about the workers’ incompetency. She called the number but when she was connected to the company line, she demanded for the owner’s personal number which the workers refused to give. 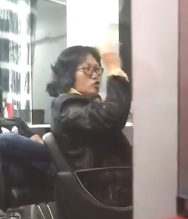 The angry customer threatened the workers:

You don’t understand. People can sue a real estate agent for 66 thousand, and sue him for another five million for the stress. Don’t believe me? Just wait until I sue you!”

She even had the audacity to call the cops, telling them she would file a criminal case against the salon workers and owner but the cops told her that disputes like this one are only settled at the small claims court.

With the police there, you would think the woman would now pay for the services rendered by the salon but she still refused to do so! The salon owner decided to just let her go and not file a case. While the owners feel sad that one customer did this to the workers and the salon, they were still new in the business and didn’t want to go through all the trouble over such a trivial matter.