Have you ever heard about DIY dentistry?

Although this technique is considered dangerous by experts, many turn to DIY dentistry at it saves them a lot of money. In fact, it is becoming a growing industry in the Internet.

For some, it can also be their excuse not to go to the dentist’s clinic. Take for example Angie Barow, a woman who was too scared of the dentist that she decided to solve her teeth problem on her own.

Instead of consulting a dentist, the 48-year-old professional dog walker decided to superglue her teeth when they fell out.

Because of this, Angie lost 90% of the bone supporting her teeth in the top jaw. Eventually, Angie had no choice but to seek professional help from dentists.

To transform Angie’s smile, the dentists had to extract most of her teeth and put titanium pins into her skull to screw false teeth.

According to Angie, she began experimenting with DIY dentistry after losing her mother to throat cancer.

“I’ve always been scared of the dentist because my mum died at 34 from throat cancer. She had a tooth out, and that’s how they found she had cancer.” 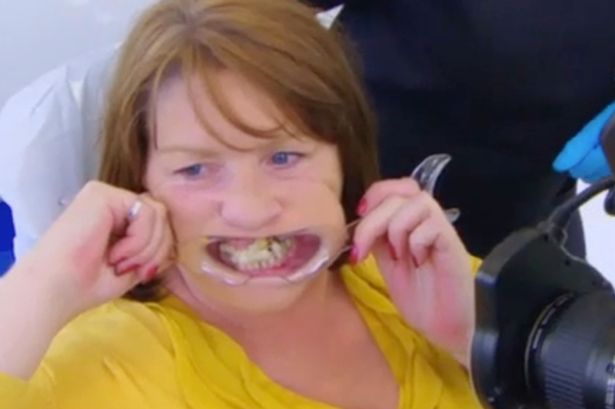 “That fear has always been in the back of my mind… you just get your mind set and you just think, you don’t go. You don’t make that phone call,” Angie explained.

The Dangers of DIY Dentistry

With more and more people resorting to DIY dentistry these days, experts are warning the public about its dangers.

The practice has become widely prevalent that people can easily access DIY dentistry videos on YouTube. Many videos show how you can close the gaps in your teeth using rubber bands and paper clips.

In addition, there are many DIY dentistry kits available online.

According to the The American Association of Orthodontists, DIY dentistry can lead to permanent loss of tooth and other dental problems.