A Pinay earned the ire of other Filipinos after she posted a rant regarding a job applicant with a 4-year education degree who isn’t fluent in speaking English. According to this Pinay, the job applicant she did not name is not fit to work as tutor nanny in Dubai; instead, she’s only fit for domestic helper (DH) work.

In her post on Facebook, the woman focused her rant on what appears to be a job applicant for tutor nanny in Dubai. She slammed the woman for not knowing how to speak fluently despite finishing a 4-year course in education.

She thinks that this job applicant did not really attend her classes and that she, the job applicant, had only wasted her parents’ money in sending her to school. The woman added that the job applicant should not be under the illusion that she can work as tutor nanny because she is only fit to work as domestic helper. 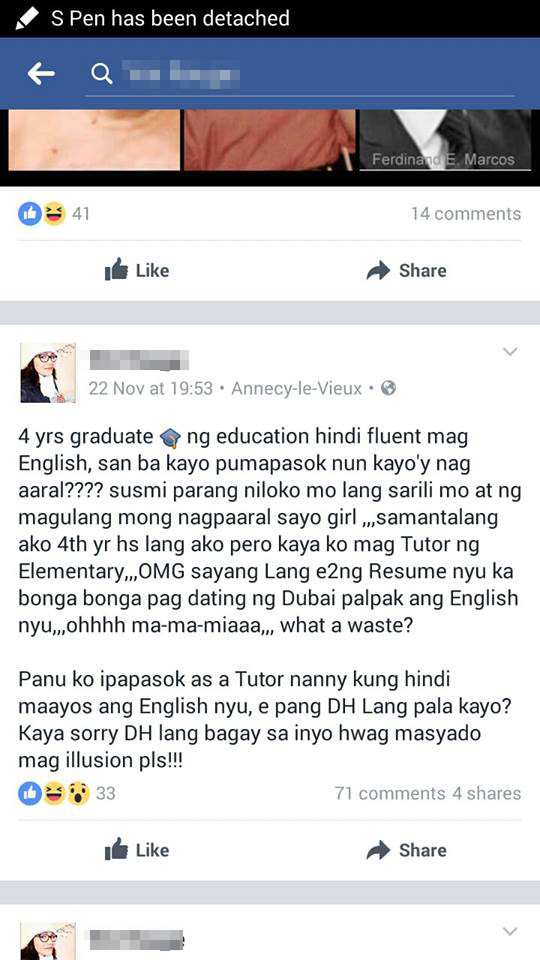 While this woman is somewhat correct in some points of her rant, netizens got angry nonetheless because it appears that she was belittling the job applicant – especially because she mentioned that the girl had an ostentatious resume but actually flunks in English.

Moreover, she added that while she wasn’t even able to go to college but was only a high school graduate, she is very much fit to tutor elementary students.

The post earned netizens’ ire because the woman has very high regard of herself but looked down on the job applicant just because the latter does not know fluent English.

Many reminded this Pinay that while, indeed, there are many people in the country who aren’t fluent English, they are good at other things. Also, it is possible that this job applicant came from a poor family and had studied in schools whose teachers weren’t also fluent in English – and as horrific as that might sound, it is actually a sad reality in the Philippines…

On the other hand, there are actually a lot of domestic helpers who are fluent in English!

What is a Domestic Helper?

A domestic helper (DH) is a worker hired to do work in a household — mainly to keep the house clean but could also be tasked to do other chores, including cooking, washing clothes, taking care of pets, and even taking care of the kids.