A woman eight months pregnant with twins died in a freak accident after getting her head trapped at a guard railings in Mizhi County, China.

The horrifying incident which led to the untimely death of the mother happened after she fainted and got her neck stuck between the metal bars.  The mother just finished dropping her 11-year-old daughter to school when she started feeling dizzy and tried to lean on the roadside guardrail to get some rest. Unfortunately, the woman landed on the tiny gap between the metal bars. As a result, her airway was blocked causing her to choke to death. 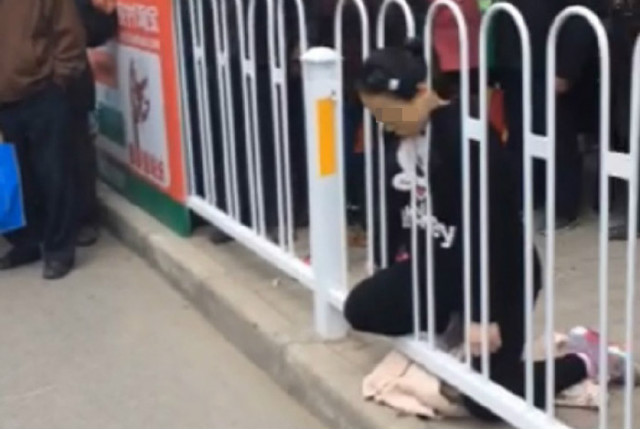 Passersby desperately tried to rescue the woman and attempted to break the rails using their bare hands. Before paramedics could even free her, the woman had already suffocated to death. They were also unable to save her unborn children.

The incident caused an uproar among residents of Shenzen who raised concerns about the dangers of roadside guardrails.

Lin Genghai, a staff of Guangming Bureau of the Shenzhen Transport Commission, commented: “The design is defective, we can see that from the video.”

Elderly Man Dies After Getting Trapped in a Guard Rail

A man in his 60’s tragically died after getting his head stuck in the guard rail at Guang’anmennei Dajie in Xicheng district on August 2015.

Based on the accounts of witnesses, the elderly man was waiting for the bus when he suddenly fainted and accidentally got his head trapped on the guard rail. Although the police and medical rescue staff arrived immediately at the scene, the man had already passed away. His exact cause of death remains unclear.

On October 2013, a woman also got her neck accidentally stuck in between the guard rails in Zhongguancun in Haidian district. The woman passed away after days of treatment at the hospital.