MANILA, Philippines — Richelle Ann Santos dropped her wallet containing Php14,000 ($300) inside a taxi. She felt hopeless that it would ever be returned to her because she didn’t even have a contact number written inside her wallet and, as we all know it, it is rare to find really honest people these days – especially when a good sum of money is involved!

According to her post on Facebook, she withdrew the money for her son’s birthday the following day. She rode a cab but the driver dropped her off near St. Luke’s [Medical Center] because he could not bring her to Makati since his cab was ‘coding’ for the day.

Santos did not notice that she dropped her wallet. When she finally realized that it was gone, she was in a state of shock that she did not know what do think or do. She found it difficult to talk.

She could not believe that she dropped the wallet containing her hard-earned cash and felt sorry for withdrawing the money for her son’s birthday when she could have done it the following day.

Santos also lamented how she was not able to take note of the taxi’s plate number, how there was no contact number in her wallet, and how it contained not just her money but government IDs and her son’s health card.

Just before going to bed, the still in-shock Santos decided to open her social media account – and got another shock! But this time it was a pleasant one. 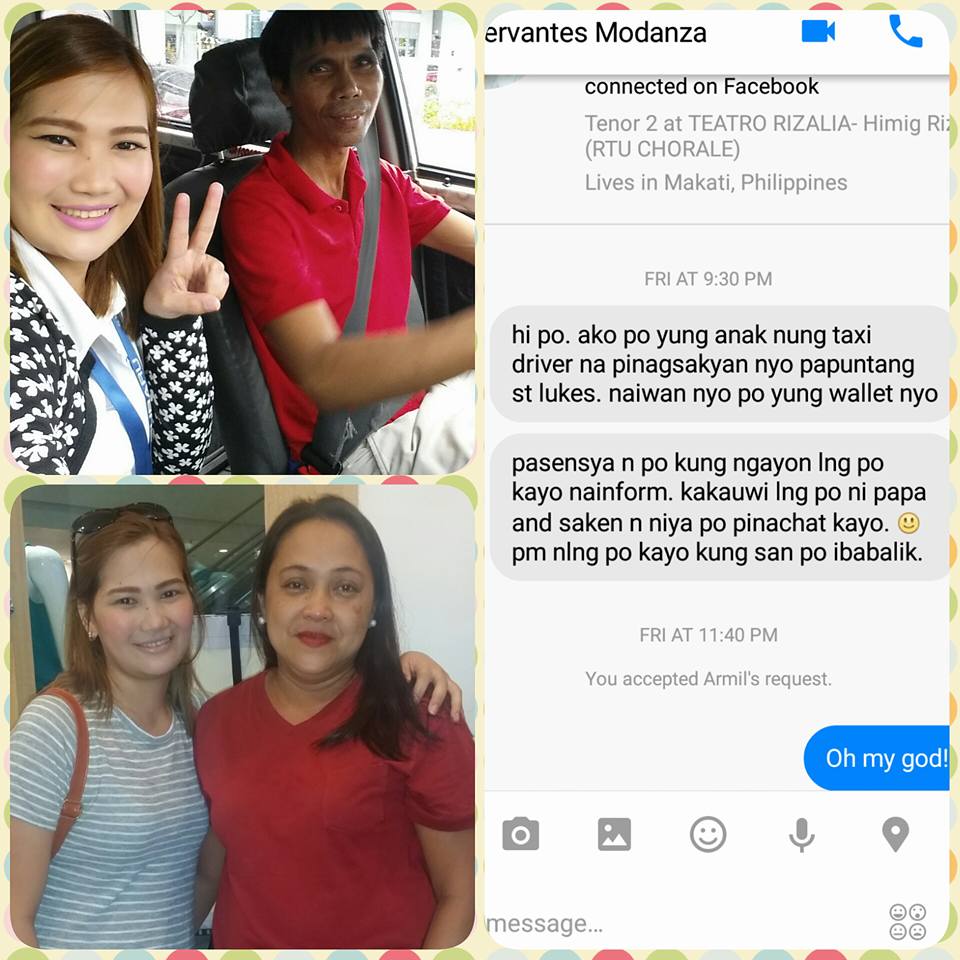 A certain Armil Cervantes Modanza had a message for her in her ‘Other’ folder on Facebook. He informed her that he is the son of the taxi driver who dropped her at St. Luke’s earlier in the day. He said Santos dropped her wallet in the cab but he only messaged her that late hour because his dad had just arrived home from a busy day at work.

Modanza asked Santos where they could meet so she could get her wallet back.

The shocked Santos’ automatic response was a big, “Oh my god!” Indeed, it was totally unexpected.

Santos met with the driver’s wife the following day. The honest taxi driver’s name is Ramil Modanza and he drives the cab with plate number, UVU 749. Santos and the driver would meet later in the day as she wanted to thank him personally.

According to Santos, the family even refused to accept the monetary reward she wanted to give them because they only wanted to do the right thing but she insisted and they finally accepted the money.

What a wonderful, honest family.