A woman catches dog adopting a stray cat and making a new best friend, confirming what many fur parents have known all along – dogs and cats can become good friends, too!

In the past, people always have this notion that cats and dogs will never get along – they’re natural enemies. These days, we hear so many stories of dogs and cats being the best of friends.

Take for example a dog named Cheeky, caught by her fur mom Liz Heck adopting a stray cat and inviting it to their home. 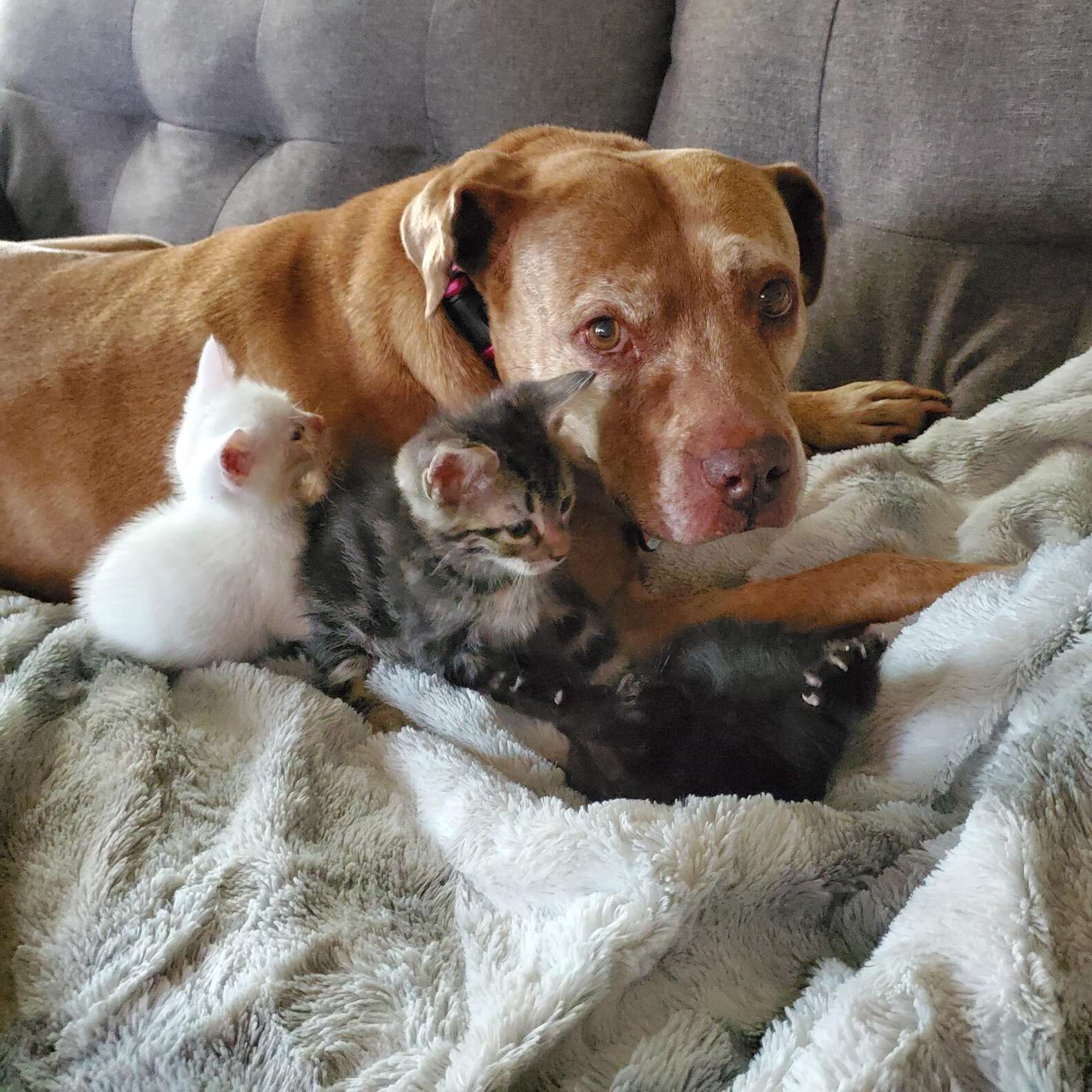 Perhaps it’s because Cheeky is used to the kittens that Liz would bring from time to time for fostering. But the kittens always get adopted so they don’t really have a regular cat at home.

Liz explains that she also sets out food at their front yard for neighborhood cats to eat. One day, a stray cat arrived at their house and decided to investigate the free food.

But it was a feral cat. Its first encounter with Cheeky wasn’t pretty. They weren’t used to each other so Cheeky got scratched in the nose. 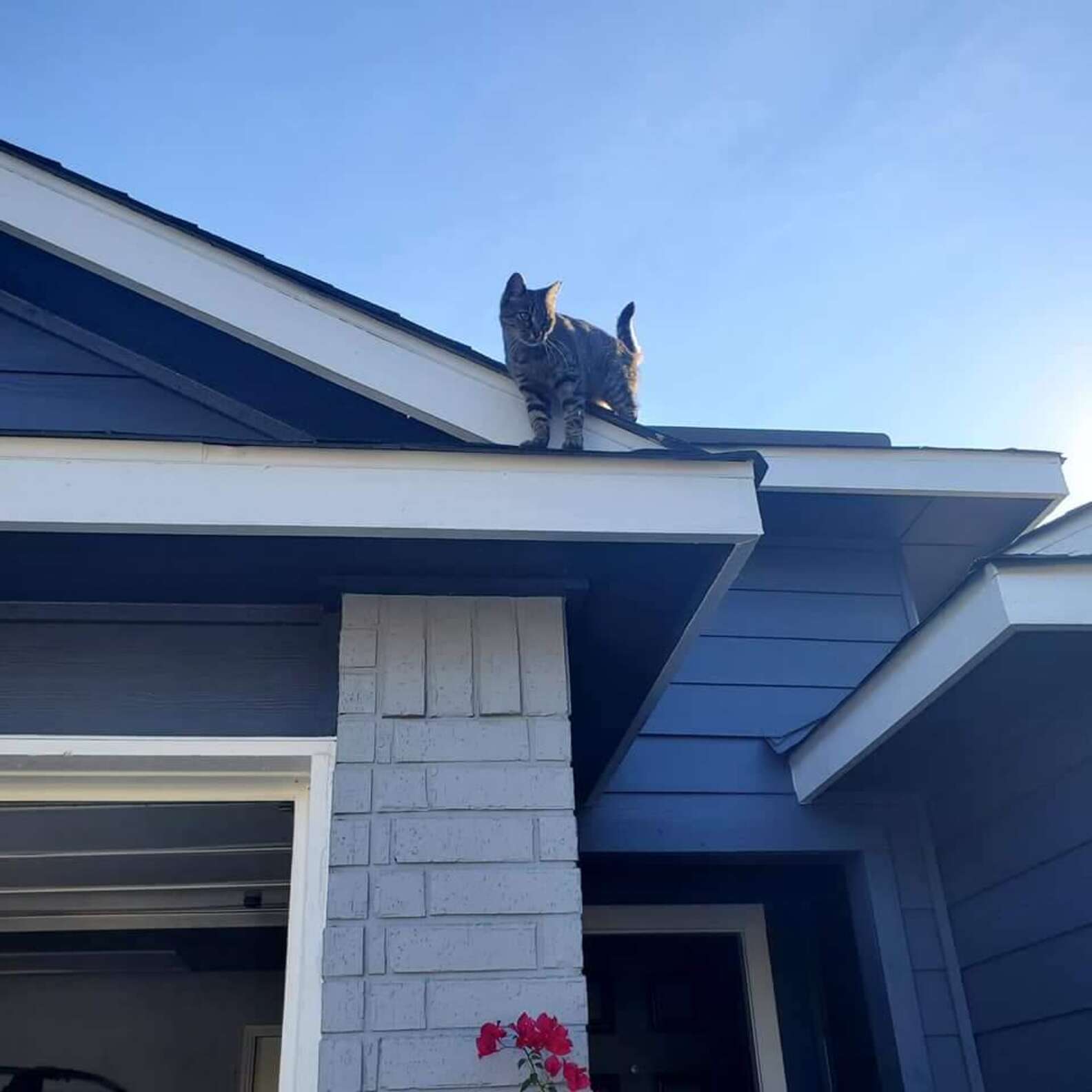 Liz thought that Cheeky will get mad at the cat forever, but days later, she found the two snuggling at their back porch like a pair of best friends. Cute!

The cat began hanging out at their house and refusing to leave after getting ‘adopted’ by Cheeky. So, they named it Sushi. 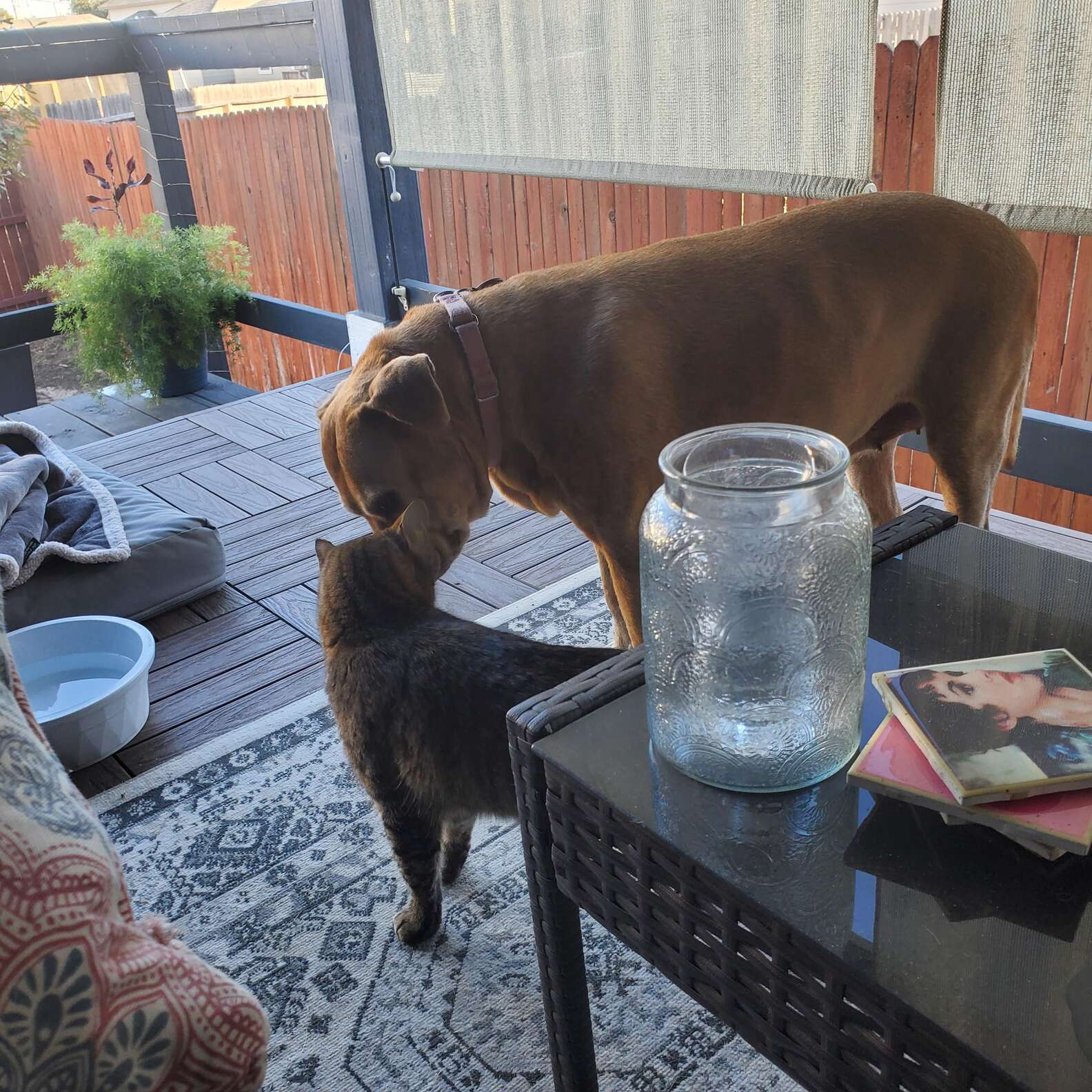 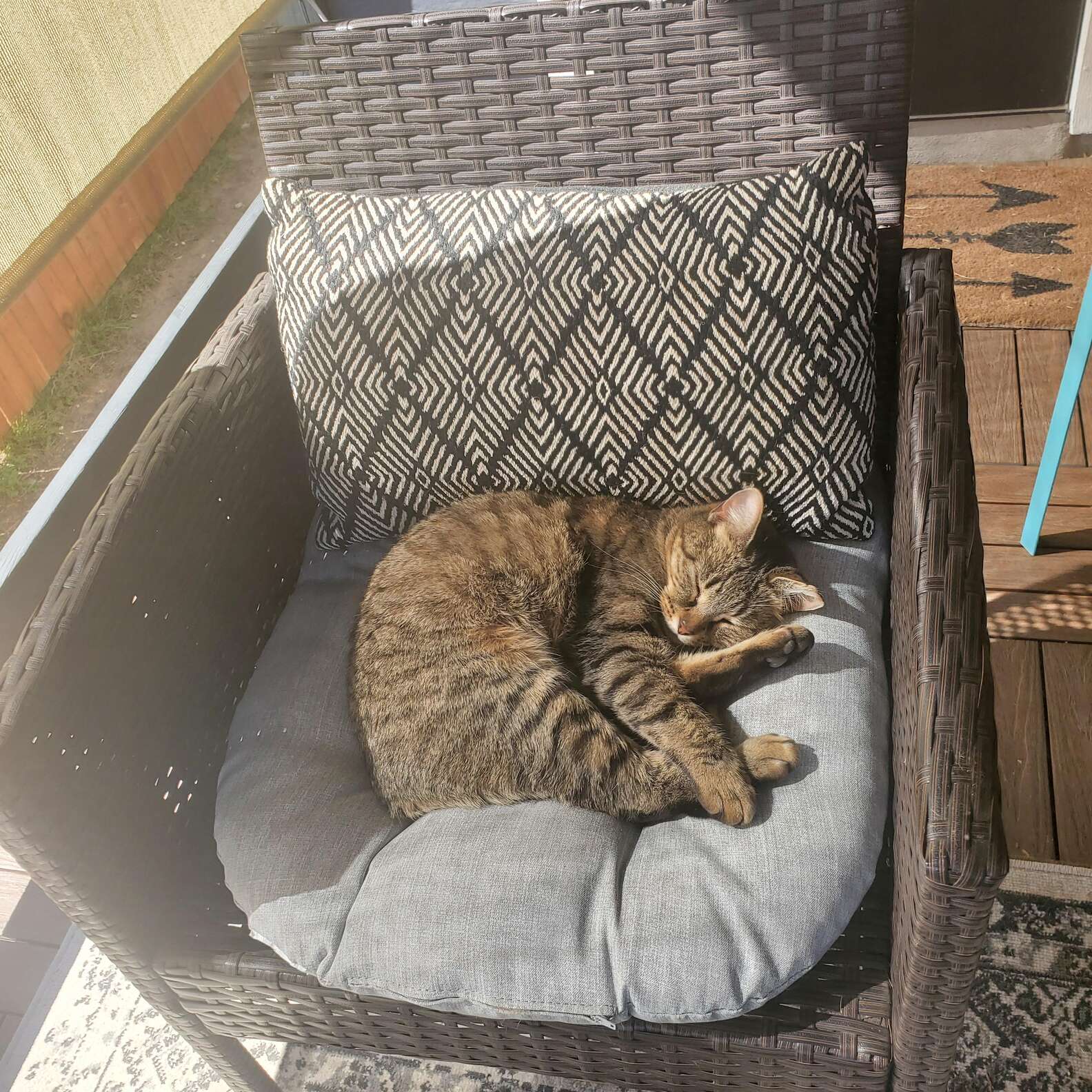 “Sushi loves hanging out with Cheeky when she comes outside. So now we put cat food on the back porch for her and put a heating pad in a box on the back porch, where she sleeps at night,” Liz shared.

“Cheeky is too big for the heating pad, but she always just comes outside to lay on her dog bed or in the grass when it’s sunny, and the cat loves to rub up on her and let Cheeky clean her head.”

Liz plans on taking Sushi to the vet for vaccinations but said that the cat already appears to be spayed and ear-tipped. 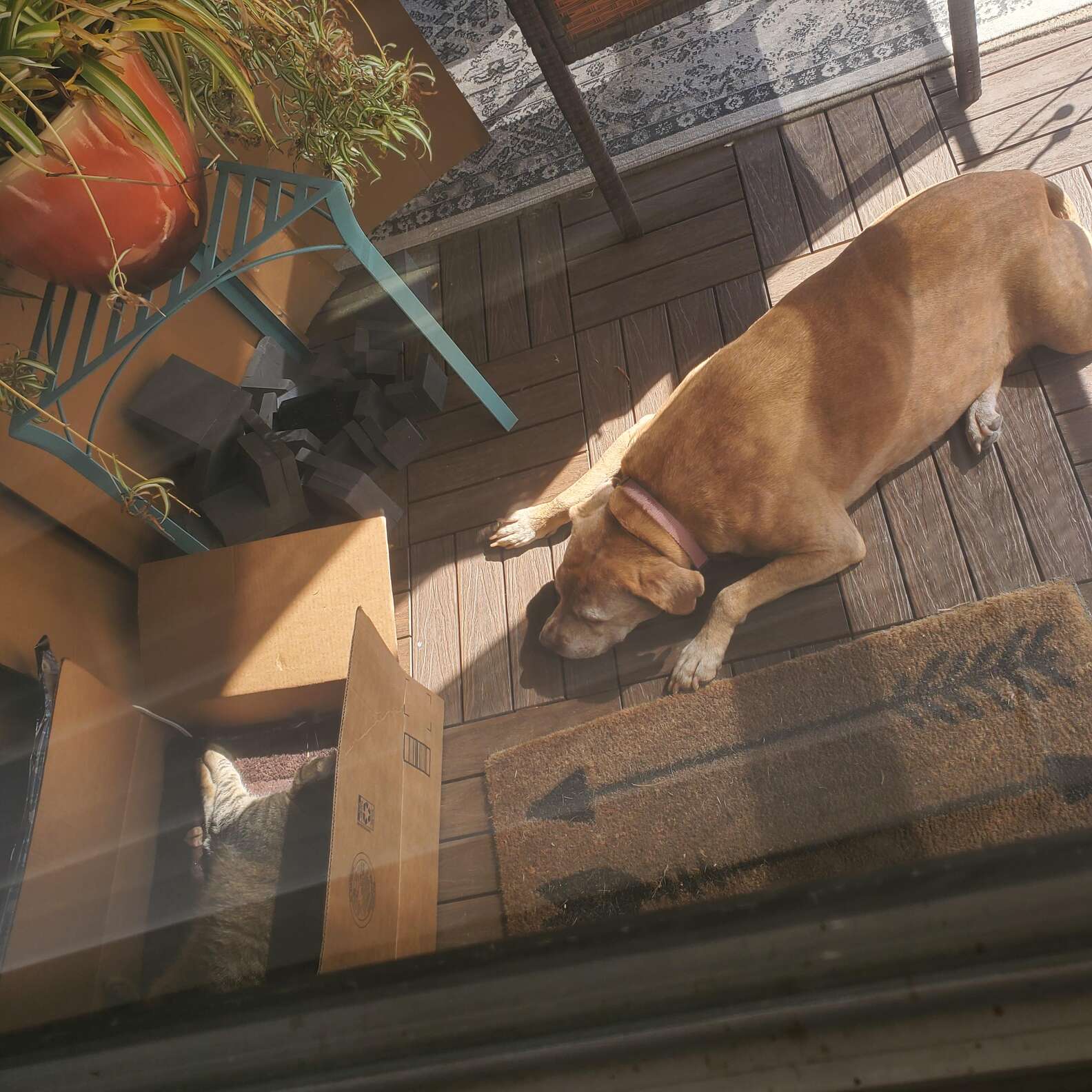 Ear-tipping is the process wherein the tip of a stray cat’s ear (just one) is clipped while the cat is under anesthesia during the spaying or neutering process.

An ear-tipped cat shows a universal sign that the cat is spayed or neutered so that animal rights groups won’t include it the next time they do a trap-neuter-return (TNR) program.

Spaying and neutering is a humane way of ensuring that the stray cat population won’t balloon in the neighborhood.