Home
Lifestyle
Health
Why Do Our Fingers and Toes Wrinkle After a Long Bath?

Have you ever asked yourself why your fingers and toes get all wrinkly after a long bath? 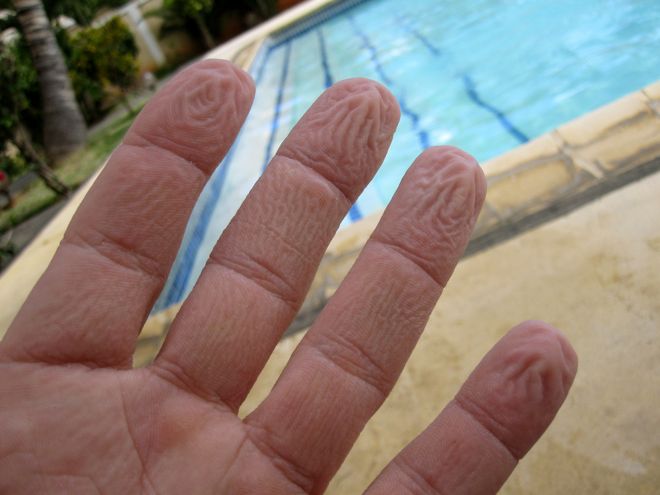 According to their findings published at the Journal Physical Review Letters, the skin’s remarkable elasticity is brought about by its expandable lattices.

The physicists explained that the outer layer of the skin absorbs water and swells up forming ridges. However, it immediately returns to its original state once it dries. In the outermost layer of the skin, which have dead cells filled with a network of filaments made of the protein keratin, swelling and absorption of water occurs. The physicists discovered that these keratin strands interlock to form a three-dimensional lattice, which can expand its volume by up to five times when the strands stretch out.

This lattice, according to Roth and Evans, actually helps the skin cells swell as well as shrink.

They revealed: “As with a spring, the more you stretch a filament, the larger the elastic energy.”

Moreover, they also found that the tension in a stretched filament  provides a counteracting force to ensure that the skin only absorbs a certain amount of water.

The physicists are hoping that their findings could help treat a number of skin disorders.

Mark Changizi, an evolutionary neurobiologist from Boise, Idaho, theorizes that the wrinkly finger is an evolutionary adaptation that allows humans to have better grip in slippery situations, according to an article published on Nature.

According to Changizi, wrinkles act like treads on tyres, which create channels that allow water to drain away as we press as fingertips on to wet surfaces. Because of this, the fingers make greater contact with the a wet surface providing them a better grip.

Although Changizi’s theory was deemed as unjustified by several researchers, the evolutionary neurobiologist disclosed that they have started conducting pilot experiments.