MANILA, Philippines- In just a matter of a year, Alexander Benedict “Alab” P. Caringal, a young boy diagnosed with a severe form of alpha thalassemia, has gone through so much in life that most of us normally can’t handle.

After discovering that Alab had an enlarged heart and fluid in his abdomen, Alab’s parents, who happened to be doctors, decided to deliver him via emergency C-section at 29 weeks last August 28, 2015. 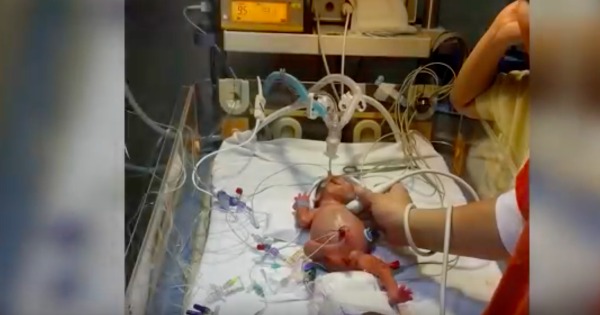 His sensitive condition has left his parents without a choice but to let him stay in the Neonatal ICU for three and a half months. But with God’s grace and the help of several doctors, Alab has beaten the odds and has become the first and only survivor with such condition in the Philippines.

“We celebrated every minute of life, which then became hours, then days, then months and now a year. Alab’s will to survive is stronger than any illness. Thank you son for the light of hope you shined each day,” his father Pipo Caringal said in the video.

Currently, Alab is developing well with no current medical conditions but requires blood transfusions every three weeks in order to maintain his hemoglobin within the normal range. But in order to totally cure his disease, Alab has to undergo bone marrow transplant. The young fighter is set to go through the procedure at UCSF Benioff Childrens’ Hospital in Oakland in the very near future.

Alab’s case, according to Pipo, has opened a new door in the management of the disease in the country. His parents wish to share Alab’s inspiring story in order to help other families going through the same difficult process.

“We only wish to reach out to families in despair who might also be undergoing the same circumstances as we did.”

What is Alpha Thalassemia?

A blood disorder that reduces production of hemoglobin, alpha thalassemia causes affected individuals to have a shortage of red blood cells causing anemia and other symptoms such as pale skin, fatigue, weakness, and other more serious complications.