At the end of Pope Francis’ encounter with youth at the University of Santo Tomas on Sunday, The Voice Kids runner-up Darren Espanto gave a tear-jerking rendition of “Tell the World of His Love”.

Although his performance was not shown during the live TV telecast of the Catholic leader’s meeting with the youth at the UST, The Digital Spy shared a widescreen capture of the Filipino-Canadian singer’s presentation. The video was originally uploaded by Kristian Buknoy on the official Facebook fan page of Darren. 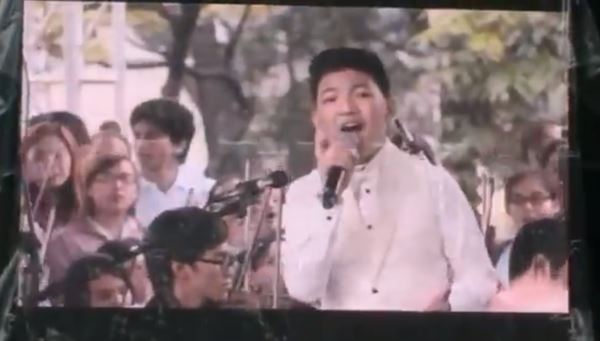 In his Instagram account, the 13-year-old singer also uploaded a clip of the song showing Pope Francis swaying with the kids.

In the caption, he wrote: “It was a privilege to be able to sing for the Pope and for God! Truly an experience I will treasure for the rest of my life!”

Darren, along with the UST Symphony Orchestra, was chosen to perform the historic song composed by Trina Belamide. The song bagged the top prize for the theme song of the 1995 World Youth Day in celebration of Pope John Paul II’s coming to the  country.

Belamide, who also sang the song during the momentous Papal visit two decades ago,  was among the 1,000 choir members who performed during the concluding mass of the Pope on Sunday at the Quirino Granstand in Manila.

In an interview with CBCP News, Belamide explained the meaning of the song that beat 84 other song entries:

She said: “Tell The World Of His Love’ is about going out into the world and spreading God’s message of love, so the message isn’t all that different from Pope Francis’ message of reaching out and showing compassion to those who most need it.”

Watch Darren Espanto’s Unseen Performance of “Tell the World of His Love”.