The Liberal Party standard bearer and former DILG chief is alleged of getting leakage from the recent Presidential debates hosted by ABS-CBN held at the at the Phinma-University of Pangasinan in Dagupan City on Sunday April 24. Netizens have pointed out that Roxas, among all the five presidential candidates, appeared to be well-prepared and delivered rehearsed answers. 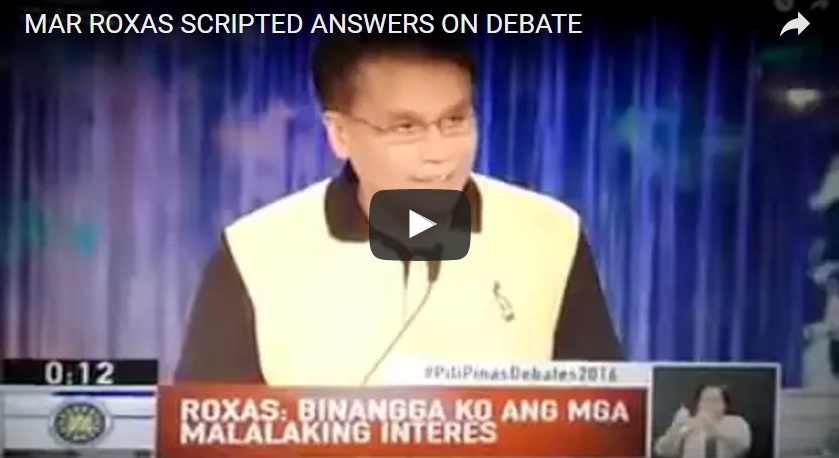 Political writer Manny Piñol, a known supporter of Davao City Mayor Rodrigo Duterte wrote on his Facebook post: “There was something that made me feel uneasy over the way administration presidential candidate Manuel Roxas III answered questions posed during the Dagupan City debate with admirable ease.In fact, Roxas did not only submit his answers quickly, he also cited specific case studies like the story of an OFW from Pangasinan who is now a successful owner of a chain of spas.There could only be one explanation, I told myself, and it is that Roxas was given a leak of the questions which would be asked during the debate.”

Roxas’s critics believe that this happened because the chargen operator was given a copy of Roxas’s answers prior to the debate. This implies that the presidential aspirant had received the list of questions beforehand.

Apparently, the video circulated on social media captured just a portion of Mar Roxas’s complete statement. An article in the blog Fight for Mar revealed that Roxas’s statement used in the caption had been mentioned earlier and was repeated at the same time the caption appeared.

The controversial clip only showed the second time Roxas mentioned the statement making it appear that Roxas cheated.

“He started with the same phrase. It was only at the end when the text appeared.”