It has been proven time and again that dogs are man’s best friends – and one video taken of a ‘drowning’ human being saved by his dogs proved that these animals are truly loyal and would willingly risk their own lives for those they love.

In the video shared by UNILAD on its Facebook page, two Labradors could be seen standing at a waterside porch with their human. All of a sudden, the human took a swing on the rope and jumped into the water.

Seeing their master in the water and possibly ‘drowning’, the two dogs frantically tried to save him. The black one was so rattled by the ‘incident’ that he began to run around and, at first, didn’t know what to do but later found a way to jump into the water from a shallow spot to the left of the porch. 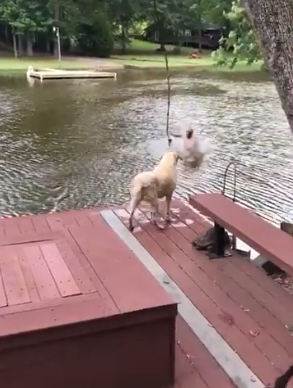 But the yellow lab didn’t appear to be too fazed by the sudden turn of events. Instead of running around in panic, the yellow one simply jumped in the water and reached their master first. This was not caught on video but the yellow lab could already be seen swimming with the man while the black one was still trying to get there.

The video has been viewed over 6.8 million times on the Facebook page! It gained mixed reactions from netizens, many of whom were amused by the dogs but others were more concerned about their feelings as they were tricked by their master. 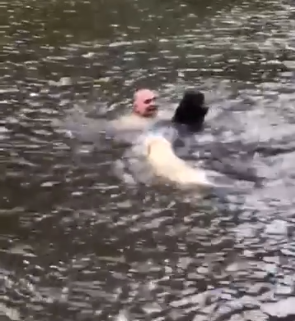 But many netizens, especially those who own Labradors said that there was no harm to the dogs and that the breed actually loves water; thus, the canines were actually just looking for an excuse to take a dip under the guise of ‘saving’ their human! LOL.

Check out this video and enjoy the ‘drama queen’ black lab’s reaction: