A popular seafood consumed worldwide, shrimp or prawn seem to be a favorite food ordered in restaurants. In fact, it is one of the foods that easily gets consumed in an “eat-all-you-can” restaurant.

Several Chinese tourists, who obviously love shrimps, were caught using their plates to hoard prawns at a buffet restaurant in Chiang Mai, Thailand. A video of the incident was posted online and quickly earned the ire of netizens. 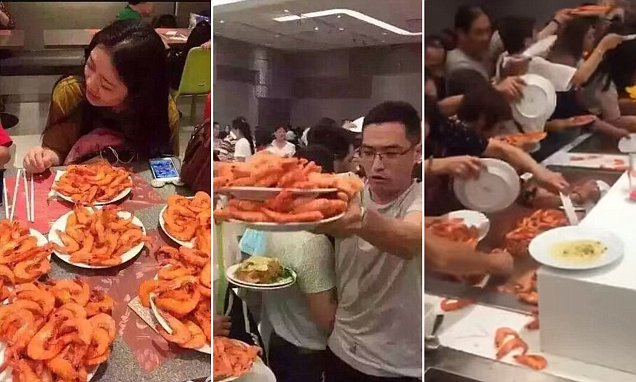 One of the female tourists was caught stuffing four plates with the seafood as others clamber on each other to hoard the shrimp. Unfortunately, the group of seemingly hungry but greedy diners took more than they could chew as piles of plates of shrimps were left untouched. Photos of the wasted food were shared on the Twitter account of People’s Daily China.

What a waste: Chinese tourists in #Bangkok spotted snatching tons of food in a buffet but left much untouched pic.twitter.com/X8HMPzNt7S

While some commenters claimed that such strange behavior is commonly observed in a buffet restaurant in China, others insisted that not all Chinese behave in such manner.

“It is so humiliating! Not all Chinese people act this way. I have to say that most of the mainland Chinese no longer behave like this,” one commenter wrote.

Shanghaiist reports that the shocking behavior of the tourists in the video was caused by the expensive price of shrimp in China. Apparently, one customer was charged 2,700 yuan or a little over $ 400 for a plate of prawns in a restaurant in Qingdao in China.

Men Banned from Buffet Restaurant for Eating Too Much

A former rugby player and his friend were banned from eating at an eat-all-you-can restaurant in Brighton in England for eating too much food.

George Dalmon and Andy Miles each consumed five bowls of stir-fry during their regular meals at the restaurant.

According to the manager of the restaurant, the pair was eating him out of the business. They managed to tolerate the behavior of the two customers for two years but decided to put an end to it.

“They are in such a hurry to beat everyone to the food they spoil everything. We are supposed to be a buffet but they eat everything out of the bowls before people can get there. We just can’t keep doing this,” the manager told THE TELEGRAPH.

Share this:
Tags:buffet restaurant, eat all you can restaurant, greedy tourists in Thai buffet