A lot of people are afraid of pitbulls because these dogs are huge and have a reputation for being fierce yet many would also defend the breed, saying that everything boils down to training, discipline, and love.

This is proven by a little girl, just 4 years old, who managed to keep all 6 pitbulls in her family waiting for her command to feed them – despite there being food on the floor!

Dubbed as the “pitbull whisperer”, this girl starred in a YouTube video where she had all six of their pitbulls surrounding her inside the kitchen. All males, the dogs could be potentially dangerous if untrained yet the ones around her were well-disciplined. In fact, they waited for her command – and even if they did not immediately sit when told, their discipline towards commands for food is quite amazing! 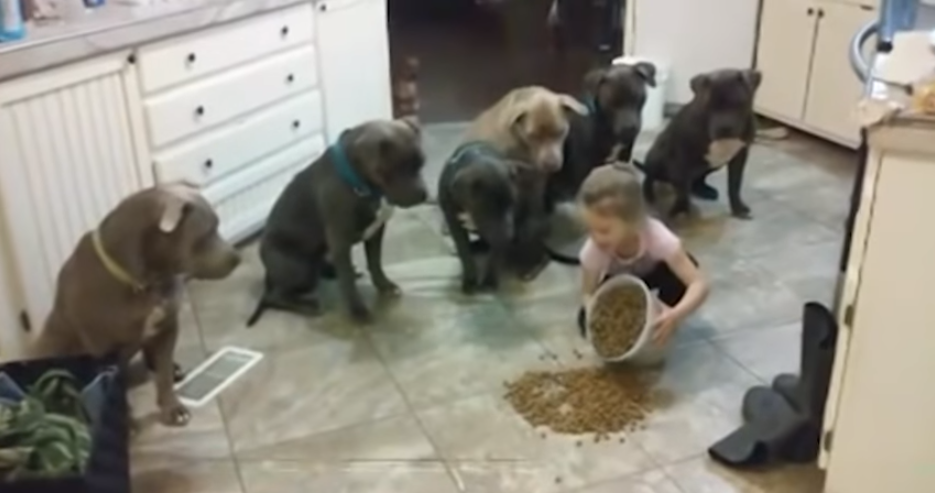 In the clip, the girl could be seen talking to each of the dogs, praising them. This could be one of the reasons why she is well loved by these pets. After all, it is believed that dogs and other creatures can sense compassion or evil in humans – and it is easy to see they only see goodness in this tiny human.

When it was time to feed these ‘ferocious beasts’ (as media often paints), the girl calmly took a bucket of dog food from the countertop and poured the contents on the floor. Untrained dogs would have dashed in and chowed down on the meal but these well-disciplined pitbulls waited for the signal.

Yes, despite the food just a few steps away, these six males waited. It was amazing how they waited for the girl to finish counting and give the signal before they finally dashed in and helped themselves to the feast!

Way to go, little pitbull whisperer! And kudos to her parents and the dogs’ trainers.