A waitress was so shocked to receive a $3,000 tip from the customer who had only spent less than $50 for a meal that she posted a photo of the receipt on social media to thank the generous person whose identity she didn’t disclose because this person had specific instructions that he/she should not be identified or publicly named since it was all part of a ‘Pay It Forward’ campaign.

But what’s a ‘Pay It Forward’ campaign and how did this one start?

First of all, a ‘Pay It Forward’ campaign is one wherein a person is given something (of any value or form but of some importance/significance) by the donor; the recipient can enjoy the gift in any way he/she likes but is encouraged to pass the good deed to another person in the future.

Oftentimes, the recipient does not have to give the same gift that he/she received but could pick something that he/she wants to give to that new recipient. 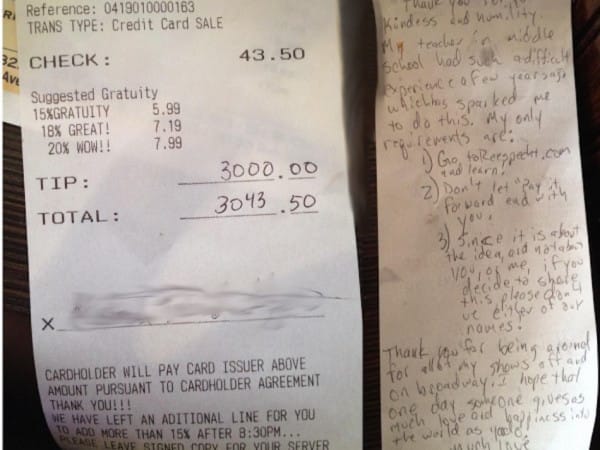 Now, back to the story, the person who gave the huge tip to the waiter would later be recognized by the person who launched the original ‘Pay It Forward’ campaign as his former student in middle school. This generous person had 3 conditions for the recipient:

Thank you for your kindness and humility. My teacher in middle school had such a difficult experience a few years ago, which has sparked me to do this. My only requirements are:

1.) Go to ReesSpechtLife.com and learn!

3.) Since it’s about the idea and not about you, or me, if you decide to share this, don’t use either or our names!

Thank you for being around for all of my shows on and off Broadway. I hope that someday someone gives as much love and happiness into the world as you do.

It turned out that the campaign was launched by Richard Specht after his 2-year-old son Rees died in a drowning accident in 2012. Specht was amazed that his simple campaign had continued all these years and that a viral story relating to the campaign would turn out to involve one of his former students…