A heartwarming story about a woman who ate leftover chicken at a Jollibee branch in SM Bacolod is making rounds in the internet these days.

Because poverty is rampant in the country, it’s not unusual for us to hear stories about people eating leftover food in restaurants.

But this story has an unusual twist and it will amaze you.

Mimi Lizada Bhatti, a netizen who witnessed what transpired between a hungry woman who entered a Jollibee store and its crew, shared the story in her Facebook account, reports The Daily Pedia.

According to Bhatti, she saw a woman who looked “hungry and tired” approach the store crew who was cleaning one of the tables in front of her. Based on her observation, the woman seemed to be asking for the crew’s permission to eat the leftover chicken.

The crew left while the woman ate what’s left of the chicken. Bhatti then saw the crew talking with the store manager and the security guard. A few moments later, she noticed the woman leaving Jollibee.

Now here’s the best part of the story: The crew followed the woman and asked her to return.

So why did he ask the woman to come back?

There was actually a one-piece chicken meal for her on the table!

Bhatti, who later on found out that the manager paid for the woman’s meal, also offered her burger to the woman.

Check out Bhatti’s full story below: 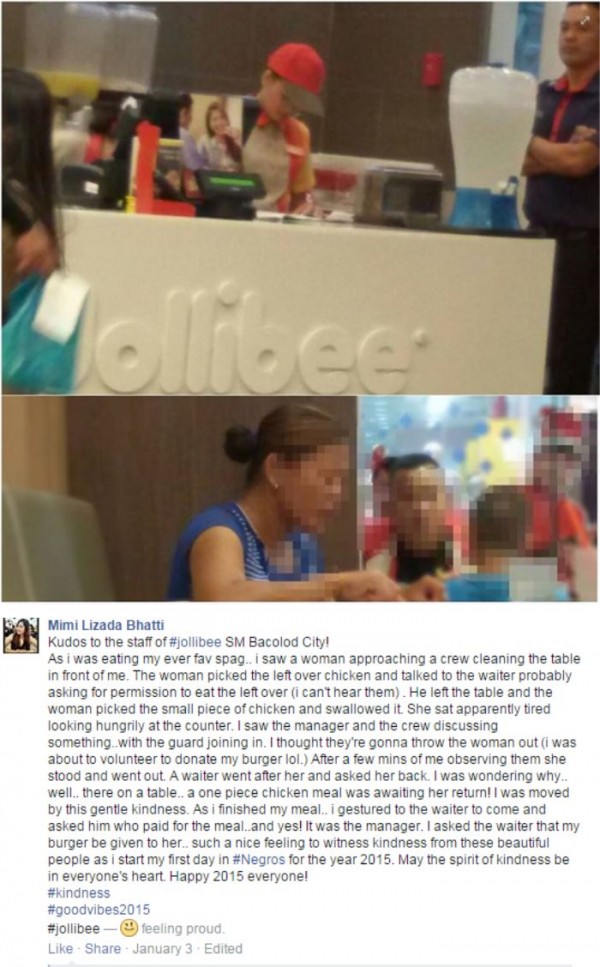 Poverty in the Philippines

Even with our rising economy, poverty is still one of the challenges the Philippines is facing, according to a report by GMA News.

Arsenio Balisacan, Secretary of Socio-economic Planning said that the poverty rate in the country is projected to be 18-20 percent of its 100 million people by 2016, which is the end of President Benigno Aquino III’s term.

“This new target takes into consideration the slow response of poverty to economic growth beginning 2006 and the setback in 2013 due to the wide-scale destruction resulting from natural and man-made disasters,” Balisacan explained.

Balicasan added that poor families must be trained in order to get better jobs, while farmers must be provided with greater opportunities.

Currently, economic growth is limited to exports, business outsourcing and a few other sectors. This is one of the big reasons why the poverty rate in the Philippines remains 25 percent since 2003.