It is something you definitely do not see every day but it is heartwarming and has received thousands of likes and shares on social media: a snapshot of a police dog hanging on for dear life, clinging onto to the legs of a rappelling cop.

Is this animal cruelty? Not really! 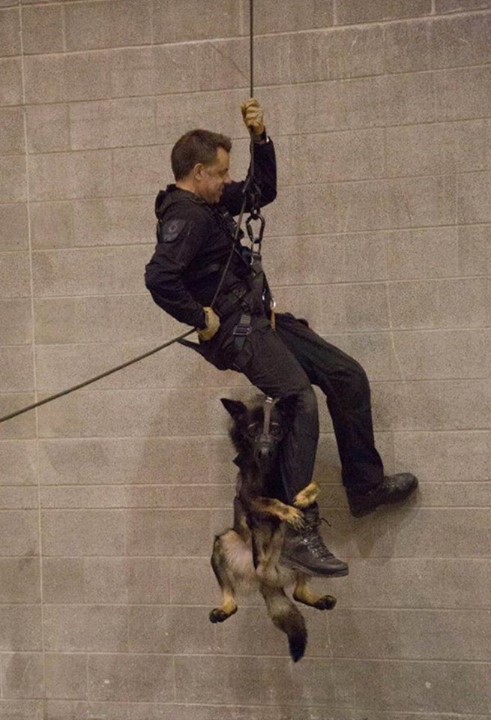 You see, this dog is Niko, a 5-and-a-half year-old German Shepherd who belongs to Vancouver Police Department’s Canine Unit in Vancouver, Canada. Niko has mastered the art of holding onto his handler’s leg. Niko and Constable Dan Ames have done plenty of climbs together; though at the time the picture was taken, it was the first time that the two had gone down from the 5th story of a building!

It is incredible how this dog was able to keep his calm and trust his master, even if they were going down such a tall building! Animal lovers everywhere are hailing Niko for his bravery.

It is also wonderful to know that Niko and Constable Ames are training hard so they could save more lives in the future. Kudos to both of you!

Known as the controlled descent of a vertical drop, rappelling is a special technique used for going down from a steep surface which is deemed too dangerous to descend without protection. The technique is also called “abseiling”.

Ropes, anchors, climbing harnesses, and descenders are among the top equipment used for rappelling. For additional protection, especially against sharp rocks and sheer drops, it is also important to use safety gear like helmets, boots, gloves, and other protective clothing.

Although often practiced as a sport, rappelling is also an important technique learned by first aid workers, policemen, firemen, military, and other people for other applications.