Most parents love sharing back to school photos of their children at the beginning of the school year. Unfortunately, not everyone gets that opportunity.

Julie Apicella, for example, lost Emily, her daughter, to kidney cancer. The little girl was diagnosed with the disease when she was 5 years old.

The mother wanted to raise awareness about what it’s like to lose a child in such a tragic way and she did it in a way that has broken the hearts of many. She posted two photos on Facebook, one with her girl in uniform in 2015 and the other shows an empty space in 2016. 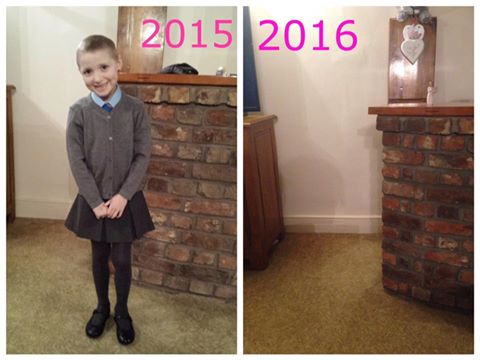 “School photo time – obviously someone very special missing – my daughter Emily. Imagine if your school photo this year is the LAST you will ever be able to take and will just be a memory to remember.”

“I have asked my friends and family to change their profile pics to go gold and many have done this and I thank you, those who haven’t please consider changing yours , it takes seconds and you don’t have to donate any money or your spleen in doing so. Nearly everyone on my list has children or family members and this could be your reality in the future 1 in 285 children will get A cancer diagnoses. Raising awareness of symptoms and that childhood cancer is not rare is the first hurdle to jump. Eventually the gold ribbon of childhood cancer will be as well known as the pink ribbon for breast cancer but it takes people to actually post on social media ect for this to happen.”

After Julie shared the post on Facebook, it has since generated over 10,300 shares. People have obviously been touched by the message.

To support the Glow Gold September, you can check out their Facebook page.

How Many Kids Suffer Childhood Cancer?

“Each year, the parents of approximately 15,700 kids will hear the words “your child has cancer.” Across all ages, ethnic groups and socio-economics, this disease remains the number one cause of death by disease in children. Despite major advances – from an overall survival rate of 10 percent just fifty years ago to nearly 90 percent today, for many rare cancers, the survival rate is much lower. Furthermore, the number of diagnosed cases annually has not declined in nearly 20 years.”