Home
Videos
Viral Videos
VIRAL: People Give Tidbits of Wisdom about Growing Up to Younger Ones

It is a known fact of life that as we age, we also have increased wisdom because of the experiences we’ve had.

Sometimes, we feel like it would have been great if someone, possibly our future self, would tell us about stuff and give advice on things that we should do so we will live a better life but, of course, that is not possible.

Also, it is through these experiences that we learn and gain new wisdom.

When CBC’s popular “WireTap” show ended in 2015, the producers created a funny but touching video showing people of various ages giving advice to younger ones. Aptly entitled, “How to Age Gracefully”, the video shows these people giving tidbits of wisdom – most of which were quite serious while others were on the funny side.

From a 7-year-old offering advice to a 6-year-old about letting go of the bicycle’s training wheels to a 47-year-old telling a 36-year-old to stop thinking about what other people think about them to a 93-year-old candidly telling a 91-year-old to not listen to other people’s advice because “nobody knows what the h*ll they are doing”. 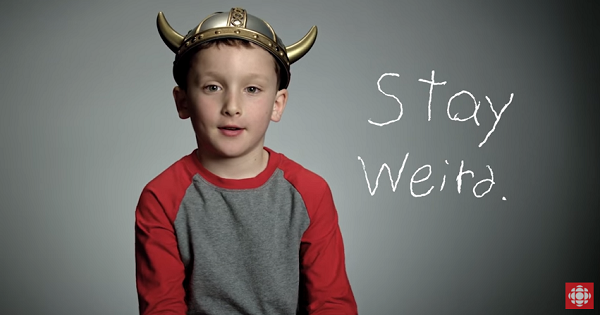 There are two people who advice younger ones to “stay weird” – the first one is an 8-year-old giving advice to a 7-year-old and a 72-year-old (shown at mid-credits) offering wisdom to a 70-year-old.

Though I liked the advice of the 12-year-old to a 9-year-old about accepting yourself and not trying to go with the “popular kids”, my favorite is that of a 91-year-old telling an 88-year-old to cultivate younger friends because otherwise “yours will all die off!” While that might sound more like a joke, it is also an absolute truth and good reminder for all ages, really.

So, which of these advices do you like best? Check them out and have a good laugh while learning more about life in this video:

Avid fans of the WireTap radio program know that the farewell video is typical of the show which started airing in July 2004 before ending in August 2015.

Since many people do not listen to radios anymore, WireTap offered podcasts which greatly increased their weekly listenership (determined to be around 350,000 back in 2008).

Sadly, after 11 years of running, the show came to an end in 2015. This saddened its fans but despite calls to continue, its host, creator, and executive producer Jonathan Goldstein would do so, citing several reasons. Foremost of these reasons is the fact that, indeed, the show had ran long enough – actually outrunning several popular shows like “Seinfeld” and “All in the Family”.

Goldstein feels that though the show continues to have good ratings and is great to produce, there’s a need for him to do something new.

Still, US listeners are still able to enjoy the shows via PRI until June 2016! And, of course, there are some great WireTap vids to find on YouTube…