An old woman’s small gesture of kindness and compassion for a man likely suffering from mental illness or drug abuse has touched the hearts of netizens from all over the world.

Ehab Taha witnessed the “most incredible display of humanity” during his fateful ride at the Sky Train in British Columbia, Canada. Based on his Facebook post, a six-foot-five tall man with mental illness suddenly began cursing and acting “really aggressively” inside the train. Although his movements scared most passengers, a 70-year-old woman took courage and did the unthinkable.

Instead of avoiding the troubled man, the old lady reached out her hand and tightly held the hand of the man. To everyone’s surprise, her kind gesture seemed to have a magical effect as it made the man calm down. In the photo of the incident snapped by Ehab, the man is seen sitting down silently.

Curious as to why the old woman did such act, Ehab spoke to the old lady after the incident.

“I’m a mother and he needed someone to touch,” the old woman told him.

Elba claims that the old lady became emotional after speaking to him. 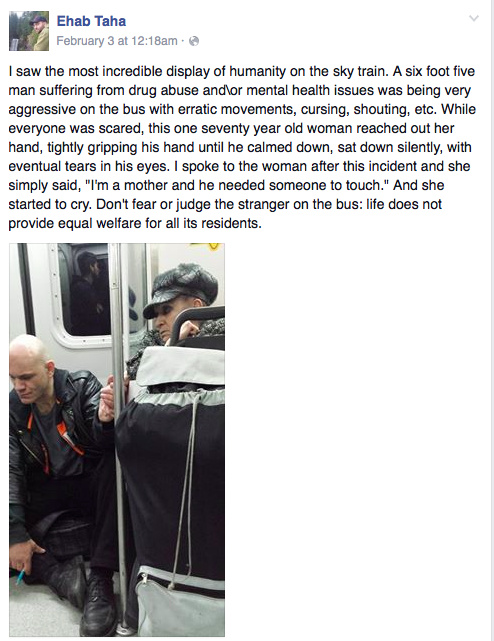 According to the National Bureau of Economic Research  (NBER) in the US, there is a “definite” connection between the use of addictive substances such as alcohol, cocaine, and cigarettes and mental illness. In fact, patients with mental health disorder are responsible for the consumption of 44% of cocaine, 40% of cigarettes and 38% alcohol.

Experts recommend to treat both mental health disorder and substance abuse issue by enrolling the patient in a treatment program that will address both problems.