MANILA, Philippines- Following the controversial road rage incident that left a cyclist dead early this week, a netizen has decided to share his  pleasantly different experience with a fellow motorist. Unlike the usual bad road incidents we often hear in the news, this story will restore your faith in humanity.

Through a viral Facebook post by motoring journalist James Deakin, JV Jaurigue was able to share the random act of kindness of Gabriel Delim and his wife Merriam Joyce P. Lugtu-Delim. 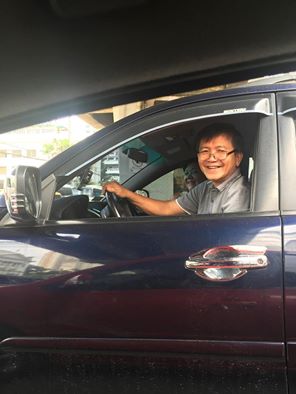 According to Jaurigue, the incident happened when he dropped off his daughter to a dance competition in Taft, Manila. Without their knowledge, his daughter accidentally dropped her phone while getting off their car.

When he reached a stop, Jaurigue was surprised to find the Delim couple trying to hand him an iPhone. Jaurigue then realized that it belonged to his daughter and that the Delim couple went out of their way to pick it up and return the phone to the rightful owner.

“After all the bad things that happens on the road like ranting, cursing, bad finger pointing and even shooting, it’s a breath of fresh air to have motorists like them. I don’t know who they are and where they live but I managed to take a photo of them,” he wrote.

Grateful for the Delim’s act of kindness, Jaurigue is urging social media users to help him “expose” the motorist’s good deed.

“Thank you so much. Whether my daughter wins or not, we already feel happy and grateful for your act of kindness.”

As of this writing, Deakin’s post has gone viral amassing over 6,000 shares.

Believing that mandatory dash cams will eliminate bad driving and ultimately solve the traffic problem in the Philippines, multimedia motoring journalist James Deakin has made a petition to make the device mandatory in all vehicles in the country.