Collecting plastic bottles and old newspapers for a living, Tatay Alfredo Manuel is a scavenger who lives in Manila, Philippines but who would have thought that this old man many often see in the streets is actually a licensed teacher who loves science and continues to enjoy learning even at his advanced age?

According to a post on Facebook by Andrew Pamorada, Manuel could often be seen in the area along Taft Ave., Pedro Gil area, and the De La Salle University (Agno and Castro area) in Manila, Philippines. In the post, Pamorada revealed that he had found a book of scientific names for plants while in Iligan City (in southern Philippines); thus, he immediately bought it, thinking it would be a perfect gift for Tatay Manuel.

Indeed, the old man was ecstatic upon receiving the book, saying he had always wanted one but the book had been quite expensive and he could not afford it. Even though he is a scavenger, Manuel’s quest for learning did not stop. 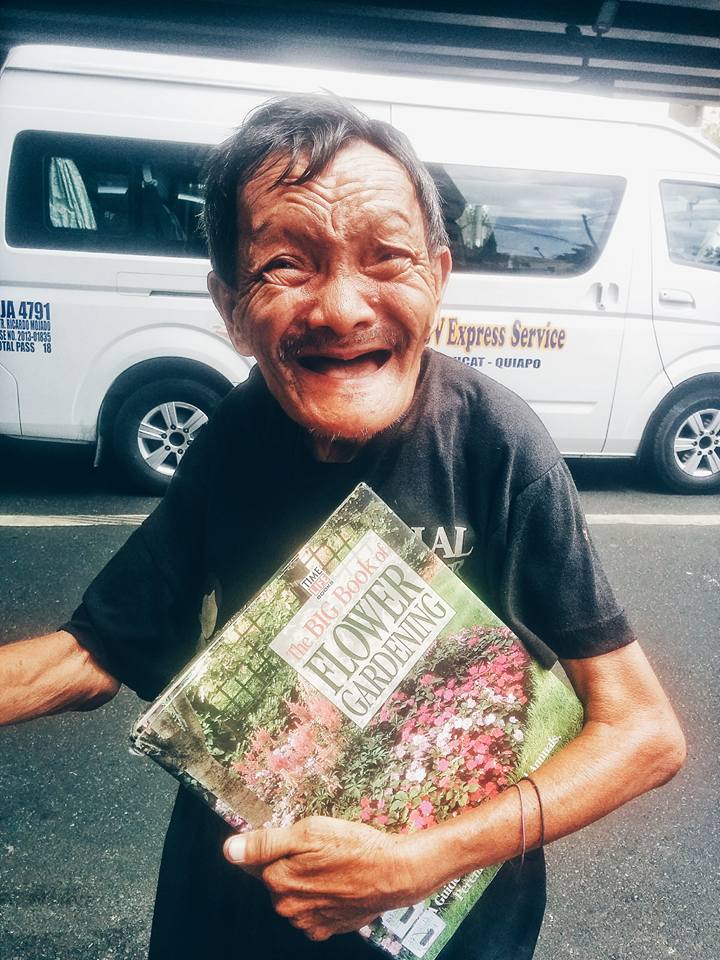 He had not always been a scavenger. In fact, some decades ago, he had worked as janitor in an elementary school. While there, he used his earnings to earn a degree. Indeed, he had fulfilled that dream and was able to graduate with an Education degree from the University of the East.

Aside from that, he had also passed the civil service exam (a requirement for anyone who wants to enter a job under the government, a public school in his case) and the Licensure Exam for Teachers (LET) back in 1992.

According to GMA News, for 5 years, he tried to get a job as teacher but just couldn’t find a school who would hire him, not knowing that he had a pending theft case in the school he had past worked for. He would later give up on his dream of becoming a teacher and settled with becoming a scavenger though he continues to learn from the old newspapers he collects and from other sources.

Pamorada and many of those who had encountered Manuel would tell you that this old scavenger is a brilliant one. He has memorized countless scientific names of plants and could answer questions about them without missing a beat.

According to Pamorada, Tatay Manuel is also looking for someone who would challenge him in a fun contest about scientific names of plants.

In the animal kingdom, scavengers are those animals that feed on dead plant or animal matter in their habitat. Vultures are among the most well-known examples of this animal classification.

In humans, however, the term is not about food habits but about an occupation or behavior. While in the past, scavengers are defined as those people who work in the streets to remove trash (as in garbage collectors and janitors/street cleaners), the term now is used for people who scour trash bins and various spots to collect recyclable materials that can be sold for cash.