A horrific footage showing a waiter pouring boiling water over the head of a female customer who earlier complained about her soup has gone viral. According to reports, the woman was awarded $35,000 as compensation for serious injuries she sustained from the attack that took place in August last year.

The woman identified as Lin was eating at a restaurant in Wenshou in eastern China with her family and friends including her 7-month-old son. Lin allegedly asked the waiter, identified as Zhu, to add more hot soup to the group’s hot pot. 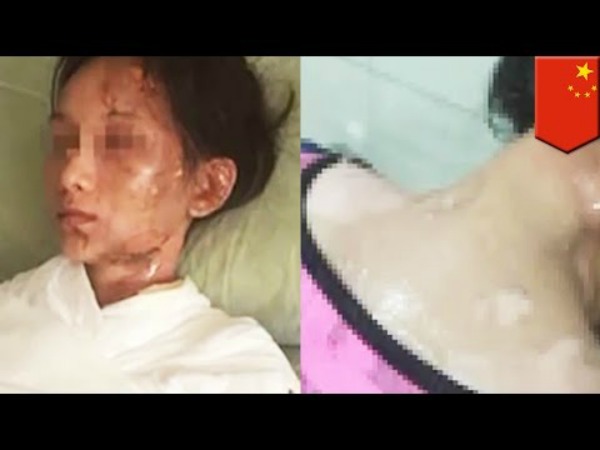 After the waiter failed to grant her request, Lin once again asked the waiter to put soup on their pot. However, Zhu simply told her that her pot did not need a top up.

Dismayed by Zhu’s service, Lin immediately posted a complaint on the Weibo account of the restaurant’s shareholders. Upon learning about the bad review, Zhu demanded that Lin put her post down.

Unfortunately, Lin refused to delete her comment and this prompted Zhu to do the unthinkable. Moments later, Zhu was seen returning to the table with a large tub of boiling water and poured it over Lin’s head.

The attack didn’t end there as Zhu was also spotted dragging Lin from her chair, and pinning her to the ground enabling him to kick and punch her. Shocked customers and waiters pulled Zhu away from Lin as they tried to stop the fight.

Suffering severe scalds to 42% of her body, Lin was confined at the intensive care unit of a hospital.

Zhu, who was 17 at the time of attack, was sentenced to 22 months in jail as his age was considered for sentencing.

Lin initially asked for $84,000 in compensation, but the court decided to reduce it after discovering that the management had covered some of her medical fees.

How to Report Bad Customer Service

Poor customer service can get the best of us especially if we don’t receive the appropriate support from the management. Here are some smart ways to report bad customer service.