Taking care of a baby is never an easy thing. So just imagine how difficult and overwhelming it would be to take care of quadruplets.

This video recently went viral online after several websites picked up on the story. Uploaded on YouTube by Gardner Quad Squad last October 2015, the short but undeniably hilarious clip found new life as it resurfaced on the web lately. What drew viewers to it is that how it gives a peek of what it’s like to be a parent to four little angels. 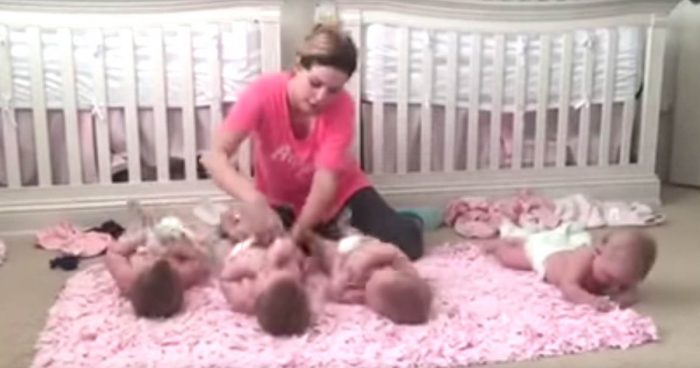 According to a blog by Little Things, the Gardners have been attempting to have a baby for 8 years. After deciding to give In Vitro Fertilization (IVF) treatment a chance, the doctors put two fertilized egg into the mom. The couple was eventually surprised to discover that none of the eggs failed and each one managed to split into two. The family has been posting updates about their experiences via their Facebook page.

Now, the family has Indie, Esme, Scarlett, and Evangeline and Mom Gardner is evidently having a great time doing her mommy duties – including changing their clothes and their diapers.

Watch how this young mom handles the seemingly-impossible task:

Aptly entitled “Changing Quadruplets,” the funny yet heartwarming 3-minute YouTube video has received a lot of positive feedback online and has racked 184,991 views as of this writing. So far, the Gardners have 57,470 subscribers on the said video-sharing site.

Many have pointed out how the mom seems to be enjoying what she’s doing. Also, some parents were glad to have picked up some techniques about how to keep their kids still while changing their diapers. For example, YouTube user mtheta commented “giving the diaper to play with while waiting is a great trick!”

For more fun videos, head over to the official Gardner Quad Squad channel at YouTube.