MANILA, Philippines- A police officer of the Philippine National Police (PNP) Highway Patrol Group is alleged of slapping and orally defaming a female driver on Saturday, September 24 along EDSA.

In a dash cam footage shared by ABS-CBN News, Senior Inspector Rufino Noog signalled Rachel (not her real name) to stop, and blocked the car before briefly sitting on her vehicle’s hood. Although it was not captured on the video, Rachel accused Noog of slapping her, while the latter reasoned out that she was attempting to run over him. 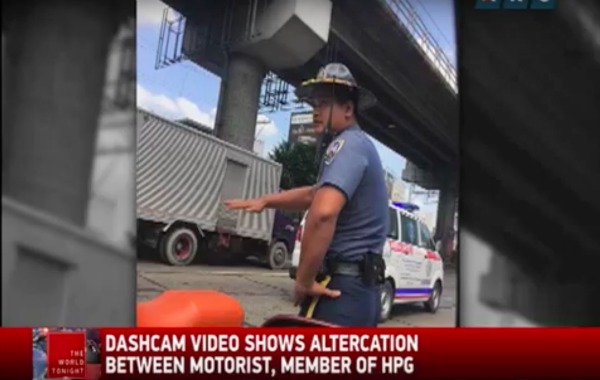 After learning that Rachel’s vehicle is equipped with a dash cam, Noog allegedly distanced himself from her.

(He saw it and seemingly backed off. What he did is he pretended that nothing happened so I took out my phone and took his picture.)

Rachel then sought the help of another officer and explained that Noog attempted to open the door of her vehicle. A police officer, whom Noog asked to assist them, later apologized to Rachel.

Despite the apology from the police officer, Rachel stressed that she will not just let the incident pass. The two eventually agreed to talk in the HPG headquarters in Camp Crame.

Noog’s demeanor apparently changed when two of his fellow officers talked to him. He later apologized to Rachel.

(He said I’m sorry and explained that it was brought about by his job and the heat. I said I understand.)

But when the officers asked Rachel to sign a document indicating that she has forgiven Noog, Rachel refused to follow them and filed a complaint at the NBI Anti-Organized and Transnational Crime division.

Noog is facing charges of physical injury, slander, oral defamation and other administrative cases. He is believed to be summoned by the NBI.

Although Noog refused to grant an interview with ABS-CBN News, he denied slapping Rachel and insisted that he only tapped on her face to wake her up because she looked sleepy.

What is a dashcam?