Home
News
News & Culture
VIDEO: Driver Panics after Accidentally Running over a Boy in a Street in QC

MANILA, Philippines- GMA reporter Raffy Tima has shared a graphic video of a 5-year-old boy who accidentally got ran over by a car  while crossing a street in Old Balara, Quezon City.

In the short CCTV footage, an unidentified 5-year-old boy was spotted suddenly crossing the street when the car being driven by Engineer Rene Gutierrez accidentally ran over him. Gutierrez immediately stopped the car to check what happened. 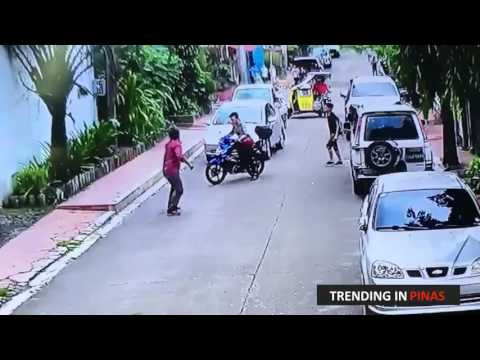 Upon seeing the boy underneath his car, Gutierrez seemingly panicked and ran away from the car. According to a GMA report, Gutierrez immediately turned himself in to a nearby barangay outpost.

Meanwhile, onlookers worked together to lift the car, rescue the boy and rush him to the hospital. The boy fortunately survived the incident with a bruise on his face. However, he will undergo further tests to confirm that he didn’t sustain internal injuries.

Gutierrez also went to the hospital where he learned that the boy’s grandfather was a former co-worker. He also promised to shoulder all the medical expenses.

The disturbing video has gone viral amassing 1.7 million views and over 16,000 shares as of this writing. Netizens quickly expressed mixed reactions on the viral clip.

Several netizens blamed the child’s parents for allowing him to roam the streets without supervision. A certain Khadijah Bint Ali Dida-agun pointed out it wasn’t Gutierrez’ fault since he was driving slowly at that time.

On the other hand, a certain John Patrick Tersona Manguera said the cars illegally parked along the street made it hard for Gutierrez to see the child.

No Garage, No Car Policy to Solve Illegal Parking Problems

Lawmakers are proposing a no garage, no car policy in order to reduce illegal parking problems that cause traffic issues in the country. House Bill 5098 or Proof of Parking Space Act proposes that car owners need to prove they have parking space in order to register their vehicle at the Land Transportation Office (LTO).