Do animals possess intelligence similar to that of humans? For centuries, humans are the ‘superior’ race among animals, using intelligence to create things that made life easier.

Of course, this has also been the subject of a long-standing debate, especially because it is argued that while human intelligence created a world that is supposedly easier to live in, such also led to the destruction of the environment.

But that’s not something that we should argue about in this article.

Going back to animal intelligence, we often think of dolphins and monkeys when the topic comes up but there’s one cat who recently showed the world that cats can also act and think like humans! Can you believe that?

This cat figured in a viral video posted by Mark Anthony Esteban on Facebook. 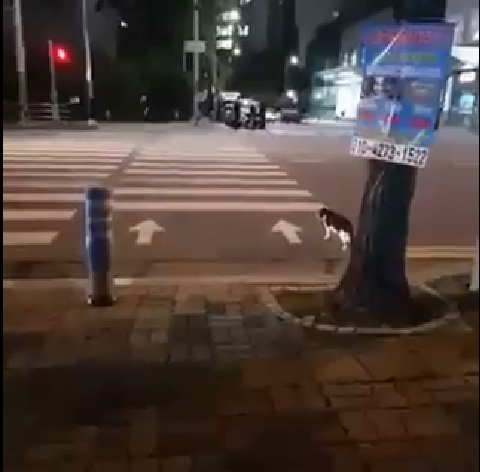 In the video, the cat could be seen walking towards the pedestrian lane at some undisclosed location. You’re probably thinking at this point that the cat could easily get hit by the fast-moving cars in that big intersection but this feline is so clever that it knew it had to stop and wait for the light to change at the traffic lights across the street!

The pedestrian traffic lights showed red, signaling for people to stop, of course, but who knew cats could also follow traffic laws and knew the meaning of the traffic lights, anyway? Well, this cat is not like any other we’ve ever seen.

What’s rather strange is that the street wasn’t exactly super busy at the time and the cat could have crossed the street, hoping to avoid the fast cars but it somehow knew that it should wait for the light to change.

Amazingly, the moment the light turned green, the cat stood up and walked on the pedestrian lane. Esteban made sure to keep the video rolling until the feline was safe at the other side of the street. Cool cat, isn’t it?