Typhoon Paolo and the low pressure area (LPA) located in the western part of the Philippines dumped a lot of rain in several areas in the country last week, leading to massive flooding and landslides in many places.

One of those affected by the floods is Brgy. San Isidro in the town of Sergio Osmeña Sr. (often shortened to just ‘Osmeña’), Zamboanga del Norte located in Southern Philippines.

A video taken from his area recently went viral because a passenger bus bravely crossed the swollen river! 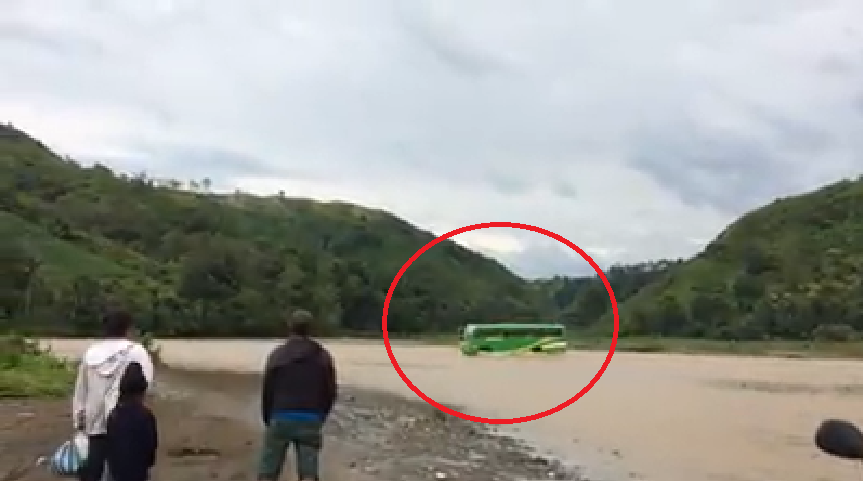 In the clip, several people could be seen waiting at the shore, most likely for the waters to subside. According to reports, this area does not have a bridge and vehicles have to brave the river, crossing it on a daily basis.

While the water is usually shallow on sunny days, it was swollen due to the incessant rains that day when the bus was filmed crossing.

As the bus appeared into view, some of those gathered at the opposite bank were unsure whether it would proceed or wait for the waters to subside, just as what they had been doing. But this bus driver was braver (or crazier?) than the other drivers.

Instead of stopping, he drove the bus forward, hesitating only for a few seconds before letting the bus go down into the river. The passengers could be heard screaming as the bus went deeper into the rather wide river.

It turned out this particular bus actually had teachers and students inside!

Everyone watched with abated breaths as the bus rushed towards the other side of the river. Thankfully, it managed to cross the river without any problems; although the passengers could be heard screaming up until the bus was safely at the opposite bank. Whew!

After the video went viral, netizens called on the local government officials to build a bridge at this area so this won’t happen again.