MANILA, Philippines- The mayor of Tanauan City, Batangas gave an unusual punishment for 11 alleged drug pushers by making them take the “walk of shame” on Monday, May 23.

Mayor Antonio Halili had the suspects paraded in town wearing signs that read: “Ako’y Pusher, Wag Tularan.” They also used archs, resembling the ones used in the traditional Flores de Mayo festivities, which had the words “Flores de Pusher” during the parade. 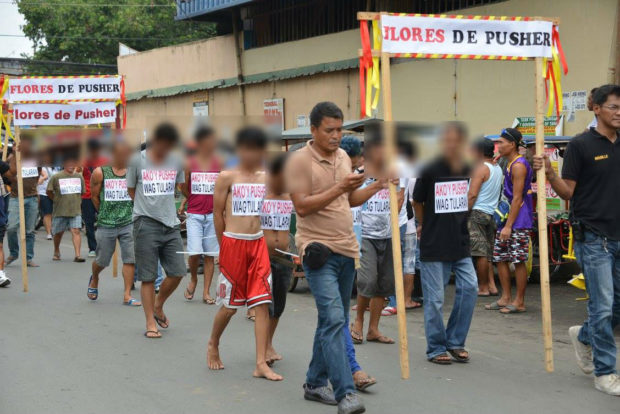 A video of the incident was posted on Tanauan city’s official Facebook page.

(Since Flores de Mayo is fast approaching, drug pushers caught by members of the Mayor’s Anti-Crime Group headed by MACG Chief Mr. Allan Fajardo were once again paraded by the people.)

Based on reports, Halili repeatedly gave warnings to the 11 suspects to stop selling drugs prior to the incident. The suspects were caught with drug paraphernalia after being put under close surveillance.

Last week, Halili was lambasted for giving the same punishment to seven alleged drug pushers, including three minors. Despite the Commission on Human Rights (CHR) questioning his “shame campaign”, Halili promised to continue his crusade as he believes it is effective.

(People in CHR, I cannot blame you since that is your job but don’t blame me because it is my job to fix my town.)

Halili, whose policies resemble that of presumptive president Rocrigo Duterte, made headlines in 2012 for subjecting a rapist and fish thief in a similar punishment.