Hunter Jobbins got the biggest break of his life after announcing on social media that a Kit Kat Bar placed inside his car’s cup holder was stolen. Soon after he tweeted a photo of the note left by the Kit Kat thief which quickly became viral, the chocolate company decided to replace the stolen sweet with thousands of free chocolate bars.

A freshman at Kansas State University, Jobbins discovered that the chocolate was missing and even found an explanatory note from the apologetic thief. 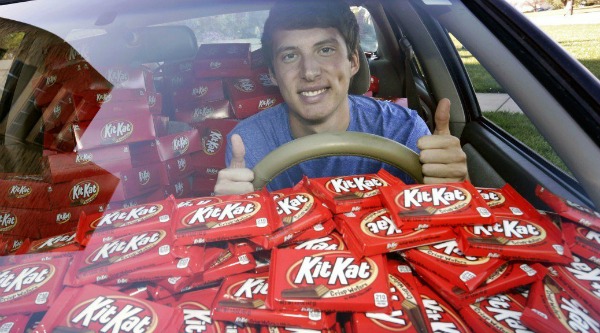 “Saw Kit Kat in your cup holder. I love Kit Kats so I checked your door and it was unlocked. Did not take anything other than the Kit Kat. I am sorry and hungry,” the thief wrote on the note.

Left my car for maybe 15 minutes in front of the dorms and I come back to this. College man pic.twitter.com/KlDx5BtXLX

In no time, Jobbins’ tweet amassed nearly half a million likes and over 100,000 retweets on the microblogging site. Kit Kat and Hershey’s took notice of his post and decided to take action.

The chocolate company tweeted: “@jabbins Who steals someones Kit Kat?! WHO DOES THAT?! Shoot us a DM and we’ll replace it for you”

Obviously, Jobbins responded to their tweet as several days later, he found about 6,500 Kit Kat bars packed inside his car. Of course, this gave Jobbins the opportunity to share the chocolate bars around the campus.

Kit Kat senior associate brand manager Shilpa Gadhok said: “When we heard about what happened to Hunter, we felt his pain.”

“That being said, we also deeply appreciate the ‘Kit-Napper’s’ sincerity in owning up to his craving—we can empathize… sometimes you just need a break,” she added.

Interestingly, the chocolate bar thief is still at large.

What is Kit Kat?

Created by Rowntree’s of York in England, Kit Kat is a chocolate-covered wafer biscuit bar globally produced by Nestle. In the US, it is distributed by H.B. Reese Candy Company, a division of The Hershey Company.