If you were a 911 call operator/dispatcher, how would you react if someone calls the helpline to order pizza? Would you quickly dismiss it as a prank call?

For one victim of domestic abuse, calling 911 to order pizza was the only thing she could think of that would not warn her abuser that she’s trying to ask for help. Her drunk boyfriend would have battered her more, if he knew she was calling 911. 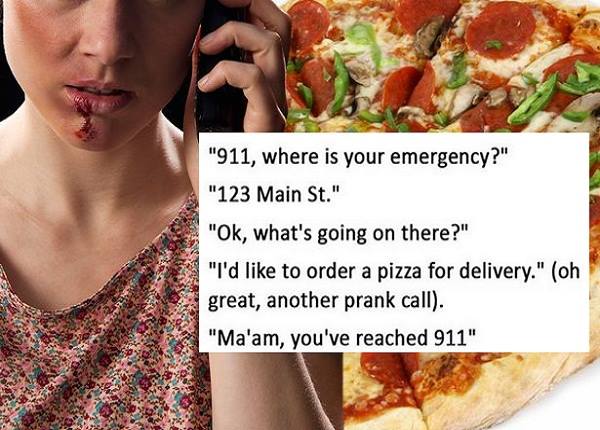 Lucky for her, the 911 dispatcher realized her call was not a prank and sent an officer to help her.

Here’s the transcript of the call:

“I’d like to order a pizza for delivery.” (oh great, another prank call).

“Yeah, I know. Can I have a large with half pepperoni, half mushroom and peppers?”

“Yeah, do you know how long it will be?”

“Ok, Ma’am, is everything ok over there? do you have an emergency?”

“..And you can’t talk about it because there’s someone in the room with you?” (moment of realization)

“Yes, that’s correct. Do you know how long it will be?”

“I have an officer about a mile from your location. Are there any weapons in your house?”

“Can you stay on the phone with me?”

If the dispatcher did not understand her coded call for help, who knows what could have happened to the lady in the hands of her abuser? According to reports, the officer arrived at the scene and arrested her drunk boyfriend. The badly beaten woman was able to save herself using the pizza delivery ruse.

The dispatcher, who was identified as Keith Weisinger, said he was glad the lady was able to escape her abuser. He said dispatchers like him rarely ever know what happened to the victims after they hang up the phone. He was glad everything turned out fine, especially because a cursory check of the lady’s addressed showed several callouts for domestic abuse in the past.