Home
News
News & Culture
“Because Some of Us Value the Life of an Addict, Not the Victim” – Dad of Murder Victim

Last Sunday night, a man reportedly high on drugs stabbed to death a pregnant woman and a minor at a beach resort in Siquijor, central Philippines – and the pregnant woman’s dad lamented on social media why there are people who give more value to the life of an addict and not the victims!

According to reports, 34-year-old Michael Añabesa Manayon of Lapu-Lapu City, Cebu was among the participants of a longboarding competition held in Barangay Solangon, San Juan, Siquijor. Eyewitness accounts told of how Manayon got angry over losing in the competition to a man whose girlfriend he would later stab to death.

The girl, 17-year-old Loreen Ramirez was from Makati City in Metro Manila but was in the town to support her boyfriend.

Before he killed Ramirez, Manayon was reported seen restlessly roaming the beachfront. According to eyewitness Carla Jean (not her real name), she saw Manayon stab Ramirez first. But pregnant Nikki Piñero ran towards the teen to save her from the attacker, not thinking that she could also be stabbed! 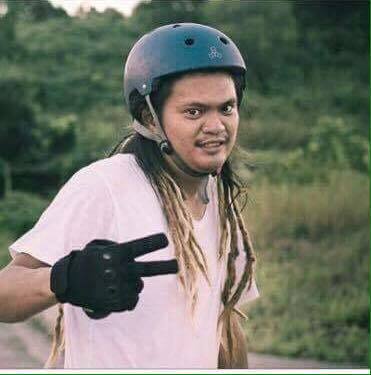 Manayon was allegedly so high on drugs that he wasn’t thinking clearly and also stabbed Piñero to death. Recovered at the scene were six kitchen knives Manayon used to stab the two ladies.

The two were rushed to the hospital but were declared dead on arrival (DOA).

Piñero’s devastated father lamented the death of his daughter and her unborn baby. He asked why she was stabbed to death in such a heartless manner, all because some people value the lives of drug addicts like her killer, instead of the lives of the victims. 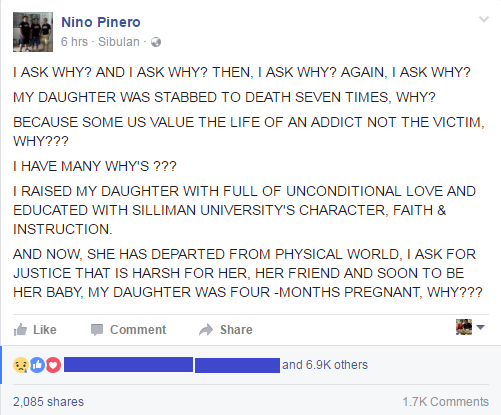 The post has gone viral on social media, garnering (as of press time) over 7.7k likes and nearly 2.3k shares as people agreed with the grieving father that people should show more mercy to victims and not to drug addicts! Do you agree?